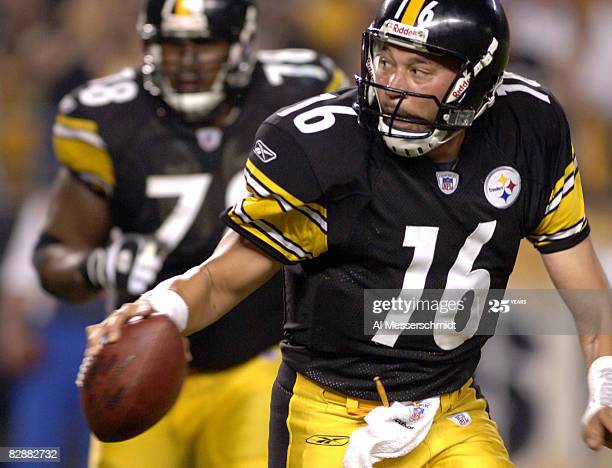 New mini-series as hopefully our final bridge from the offseason to the preseason. Under Mike Tomlin, the manta has been “next man up,” filling the role of the player ahead of you after an injury, demotion, whatever. The Steelers sure felt that attitude in 2019 with injuries littering the offense and 2020 could bring more of the same, a roster that can quickly change due to the COVID pandemic.

Whenever the next man up is called up again, let’s hope they play like these performances.

Charlie Batch played the role of trusty veteran option throughout his Steelers’ career. None moreso than his emergency start in the 2006 opener after Ben Roethlisberger’s appendectomy days before the season began.

Publicly, Bill Cowher showed all the faith in the 31 year old Batch.

“This is why Charlie is here. Charlie will be fine,” Cowher said via ESPN. “It’s a situation that can happen to any football team. You can go out there and have a starter go down, whether it’s an ankle or something else of that nature. That’s the nature of the business.”

Batch made sure to handle the Steelers’ business. It was an unspectacular but a rookie Roethlisberger-like stat line: 15 for 25, 209 yard, three touchdown, no interception performance.

Pittsburgh’s offense got off to a slow start but found its stride on its third drive. Batch hit Heath Miller and Santonio Holmes for completions and took off for a gain of twelve on 3rd and 13, setting up a fourth down conversion by Willie Parker. Three plays later on 3rd and 2, Batch hit Nate Washington for a 27 yard score.

Batch would find Hines Ward for his second score late in the half before throwing the play of the game, an 87 yard touchdown to Heath Miller, the longest play of Miller’s career.

Joey Porter would pick-six Daunte Culpepper (there’s a 2006 sentence if I’ve ever read one) to seal the win. Ben Roethlisberger would return the following week and Batch wouldn’t start another game the rest of the season, though he threw a pair of TDs in relief of Roethlisberger in a shootout loss to the Falcons. But Batch was at the ready for Week 1 and got the defending Super Bowl champs off on the right foot, even if the season was ultimately an unsuccessful one.