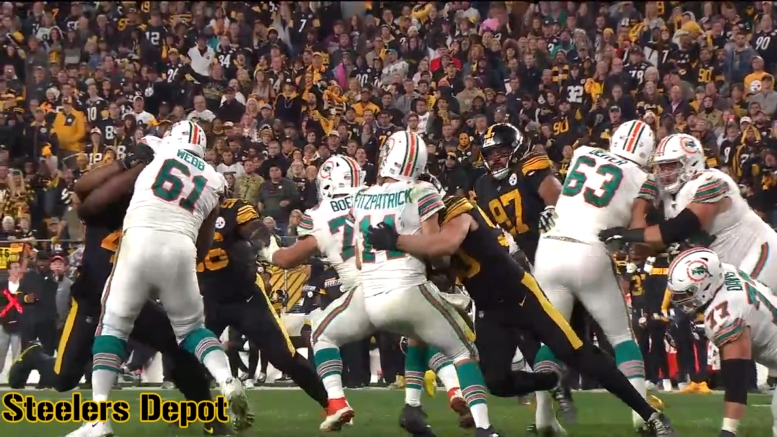 Are you looking for yet another reason to believe that T.J. Watt is one of the very best players in football—or at least, one of the very best defenders? He already finished fourth in the NFL last year in sacks with 14.5, among the highest totals any member of the Pittsburgh Steelers ever had. He also finished third in the league in terms of total quarterback knockdowns, which also takes into consideration quarterback hits.

That is according to Pro Football Focus, who credit Watt with 37 sacks and hits combined, just one behind Shaquil Barrett and Za’Darius Smith, who both finished the year with 38 combined knockdowns. Matthew Judon was fourth with 35 knockdowns.

Originally drafted by the Steelers with the 30th pick in the 2017 NFL Draft, Watt was met with some hesitance about how good he could be from some corners—including my own—as the younger, slimmer, less accomplished brother of J.J. Watt.

While even he acknowledges that he walks in the shadow of J.J., who is one of only two players to ever win the Defensive Player of the Year Award three times (the other being Lawrence Taylor), T.J. has been making a name for himself, really, since his rookie season.

Already with two Pro Bowls under his belt, and last year rising to the level of first-team All-Pro—he finished third in the voting for the Defensive Player of the Year Award himself—he is very much his own man now, and over the past year has taken his game to an elite level, in all phases.

He didn’t just have 14.5 sacks and 37 total knockdowns. He had 55 other tackles, with 14 tackles for loss. He forced eight fumbles, recovered four of them. He intercepted two passes, including one in the red zone, with eight passes defensed.

When the time comes for him to get paid, he’s going to get paid. There is a legitimate chance that he could become the highest-paid defensive player in NFL history if his contract hits at the right time. Right now, the Cleveland Browns are working on making Myles Garrett the highest-paid defender. He was the first-overall pick in Watt’s draft class.

His best feature, though, is simply his relentless desire to grow and to get better and to learn. He is the type of player who doesn’t believe he is doing everything he can unless he gets a stop on every play he’s on the field for.

His 37 knockdowns also speak not just to his skill and his athleticism, but also his drive and hustle. He finishes plays—he’s even gotten penalized a couple of times for finishing plays the officials determined were already finished before he got there—and that’s as big of a component in productivity as any.