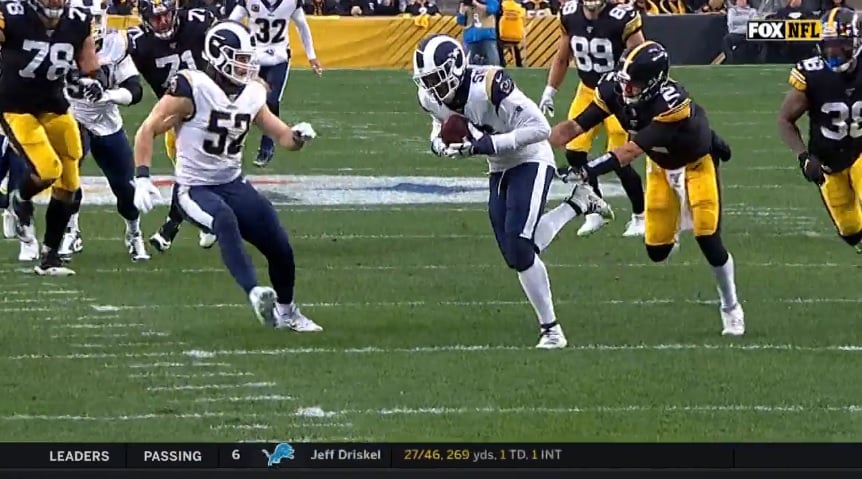 Drive Overview: One of the ugliest first drives of the season. Again, Steelers starting off aggressive. Empty set on 1st and 10 but running a “safe” concept that can be done out of spread or a tight look. Hank call, curl/flat combination, with Rudolph looking to hit Vance McDonald on the Hank route. Not a *horrible* decision but the hook LB didn’t get enough width here and Rudolph could’ve/should’ve hit the flats with the CBs bailing to the deep third in their Cover 3 shell.

McDonald gets popped and the pass is incomplete, though the Rams are flagged for a hit to the helmet. That’s where all 15 yards came from on this drive.

1st and 10. Throwing again. Pressure on the play from several sources, including a delayed LB blitz with the RB staying in that’s not picked up well between Jaylen Samuels and David DeCastro. Forces an errant throw and incomplete deep left sideline to McDonald, though McDonald should’ve kept running through his route.

2nd and 10. Terrible snap by Pouncey, over Rudolph’s head, and it’s scooped/scored by Dante Fowler. Rams go up 7-0 without their offense touching the field.

Blame: Seeing Fichtner be aggressive here. Not shrinking with run plays to start. Blame for this one ending is obvious. Pouncey for one of far too many ugly snaps last year.

Drive Overview: Drive begins with a 1st and 10 run, a man scheme with frontside down blocking. Works well enough, leaving James Conner one-on-one with rookie corner Greedy Williams, who makes a great open field tackle for a one yard loss. Battle Conner needs to win, though he was battling his shoulder injuries pretty hard at this point and would soon leave the game.

2nd down another unsuccessful run. Trying to get JuJu in the B gap between Villanueva and Foster but all this shows is where the run is going. Wider split needed is cluing the defense in. 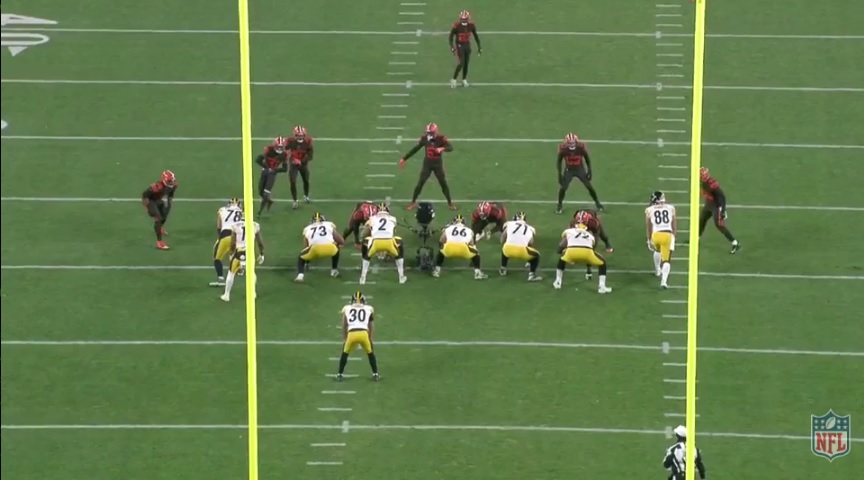 3rd and 10. Browns bring DB pressure off the left side that isn’t accounted for. Sign of things to come the rest of the season, struggling with setting up their protection against an aggressive, mug-blitz look. Steelers had more blockers (six) than rushers (five) but pressure forces Rudolph to roll left and throw the ball away before getting popped.

Blame: Conner definitely would’ve wanted to have that play back on 1st down. Created a 2nd and long. But poor scheme on 2nd and 3rd down, as I pointed out, also didn’t help. Blame cuts both ways here.