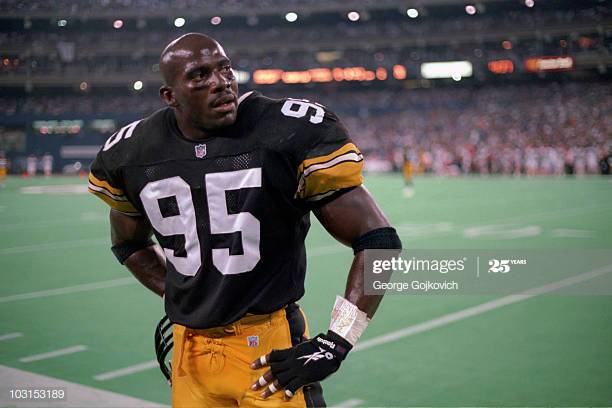 Lloyd, who was not hired for his disposition, laid a smackdown on the franchise from the city known as the “Mistake by the Lake” in front of a national audience.

Zeier, the former Georgia All-American who was making his MNF debut that night inside Three Rivers Stadium, couldn’t escape the wrath of 95 that night. Put simply, he couldn’t avoid Lloyd.

The former Fort Valley State standout recorded two sacks, a forced fumble, an interception and four tackles, helping the Steelers roll to a 20-3 domination of the rival Browns, coached then by future nemesis Bill Belichick.

Right away, Lloyd made a statement at home, welcoming Zeier to Pittsburgh with 2:26 left in the first quarter.

Look at the power and speed here by Lloyd. That’s a thunderous blow to Cleveland tight end Brian Kinchen. The pancake leads to a free run at rookie Zeier for the sack, which later led to another Cleveland punt.

Early in the second half with the Steelers clinging to a 7-3 lead following a 2-yard touchdown pass from Kordell Stewart to Ernie Mills, Lloyd struck again for the Steelers’ defense, picking off Zeier after defensive end Ray Seals batted the pass into the air, allowing Lloyd to track it down for the interception.

While he was known as a menacing pass rusher off the edge for the Steelers, Lloyd showed some good hands here, tracking this ball over his shoulder for the pick and a return of 9 yards, playing a part in setting up a 38-yard field goal by Norm Johnson for a 10-3 lead.

Coming off the ball on a delayed blitz, Lloyd runs free around left end thanks to a great play by Ray Seals to collapse the left side of the line. That allows Lloyd an open lane to Zeier again.

Once he arrives, he chops at the football, forcing it free, where Kevin Greene and Brenson Buckner wrestle with the late Orlando Brown for the fumble.

Brown recovered, but it just shows Lloyd was a bit ahead of his time with the chop at the football to force it free.

Late in the game, Johnson hit a 34-yard field goal and Neil O’Donnell found Yancy Thigpen from 9 yards out to cap off the 20-3 win.

Lloyd sort of hand a hand in Zeier leaving Cleveland after one year. The former third-round pick in ‘95 out of Georgia was a First Team All-American in ’94 at Georgia.