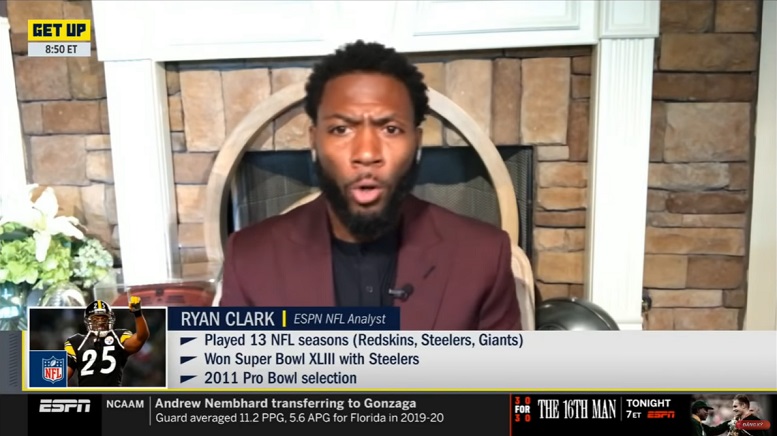 Will the Pittsburgh Steelers get back in the playoffs in 2020 after uncharacteristically missing them the last two seasons? You must like their odds of doing just that and former Steelers safety Ryan Clark, who is now an NFL analyst with ESPN, certainly believes that will be the case. During the Wednesday edition of Get Up! on ESPN, Clark made his thoughts known on the Steelers playoff chances in 2020 a month ahead of training camp getting underway.

“The Pittsburgh Steelers will be the second team from the AFC North in the playoffs,” Clark said Wednesday. “And this is not going to be, Oh, they’re going to sneak in right at the bottom. I believe this team will compete to win 11 or 12 games this season. The Baltimore Ravens, they could win 16, they could win 15, and so I expect them to represent the AFC North as the champion. But the Steelers are going to be a very tough out in the playoffs because they’re going to be built the right way. Great defensively, great upfront with a veteran quarterback that is healthy in 2020.”

Roethlisberger is indeed seemingly back healthy again after missing nearly all of the 2019 season with a serious elbow injury that required surgery and Clark likes the quarterback’s chances of having a great comeback season in 2020.

“My expectations are that Ben can play extremely well,” Clark said Wednesday morning. “You look at [James] Washington, [Diontae] Johnson, [JuJu] Smith Schuster on the outside, and also, this defense that Coach [Mike] Tomlin told me himself, he said, ‘I got the same feeling walking into stadiums that I had when you played, R.C.’ And if you remember those defenses, they carried the Pittsburgh Steelers during that time.

“And so Big Ben has weapons on the outside, he has a good offensive line. And last he was healthy, we watched him throw for the most yards he ever had in his career. But they aren’t going to be depending on big Ben as they’ve been for the last decade. So, he has to go out there and play well, play smart, but he doesn’t have to carry the team. I’m expecting big things from him and the Pittsburgh Steelers in this season.”

While Roethlisberger might not be asked to carry the Steelers offense as much as he was in 2018 when he threw for a career-high 5129 yards, he should be surrounded by players that can help him produce quite a few points throughout the 2020 season just the same. When the dust finally settles come the start of the 2020 regular season, the Steelers initial 53-man roster figures to include just a few offensive players not with the team last season.

One of those new Steelers offensive faces will be tight end Eric Ebron, who has already established himself as a big-time NFL red zone threat. A few other new offensive faces that should be on the initial 53-man roster are rookie draft class members, wide receiver Chase Claypool, running back Anthony McFarland Jr. and guard Kevin Dotson. However, none of those three players will likely be expected to contribute heavily on offense out of the chute.

Overall, it’s not surprising that Clark expects the 2020 Steelers to win at least 11 or 12 games in 2020. At the very least, this year’s Steelers team should win 10 games and that’s if they must battle through quite a few injuries. The Steelers have a very experienced team in 2020 and a lot of continuity on both sides of the football. If this year’s team ultimately fails to make the playoffs a third consecutive season, it will likely result in some coaching staff and front office changes during the offseason. Coronavirus pandemic and all, this 2020 Steelers team is built to compete for a championship.