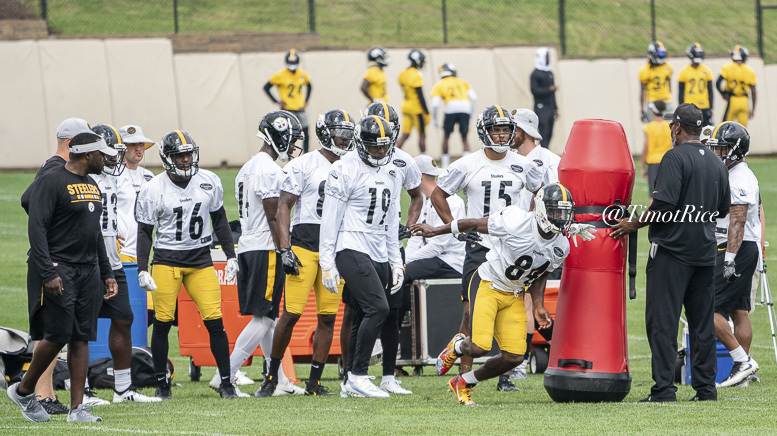 At its best, the relationship between a coach and a player greatly transcends something that is akin to an employer and an employee, but rather resembles something closer to a father and son. That’s much more likely to happen when the players being coached are young, and that was certainly the impact that Darryl Drake had on a young JuJu Smith-Schuster.

The Pittsburgh Steelers hired Drake in 2018 after Richard Mann retired as their wide receivers coach, and he had a profound effect on the young man as he entered his second season. In their one year together, he caught 111 passes for 1426 yards and seven touchdowns.

But it wasn’t just instruction about football that registered with Smith-Schuster; it was so much more than that. And when Drake passed away suddenly last August, nobody on the team took the loss harder. To this day, he continues to carry his spirit with him.

We saw this yesterday on his Instagram, posting a simple image of himself with his head bowed, apparently after a workout. It is accompanied by a quote: “Never Choose Good When Great Is Available”.

This is one of the phrases that Drake routinely used. After his passing, players had this aphorism inscribed on an armband that they would wear throughout the season. You can see in the picture that Smith-Schuster has his on.

Drake’s employment with the Steelers only spanned about a year and a half or so, but he had a profound impact on the team during that time, going beyond the wide receiver room. While Ray Sherman took over his role on the field during the year, and Ike Hilliard has since been hired full-time, you know that those who were instructed by him will not forget his teachings, on and off the field.

He was the only wide receivers coach that James Washington ever knew as a professional before his passing. Though he didn’t have the success he would have liked during his rookie season, the only one he played under Drake, he too carries his old coach with him.

Earlier this year, when asked to assess their new coach, he compared Hilliard to Drake—not for how he instructed players on the field, which of course they haven’t yet done, but because of the genuine care that he showed in his players, as people, and not just charges related to his job.

That has been a key guiding principle in the Rooney family determining whom they bring into their organization in leadership roles since the beginning, but especially with the hiring of Chuck Noll in 1969, a tradition that has continued unabated since then, and continues under Tomlin and the people he chooses to employ. Drake was as good an example as any, no matter how brief his time was here, and you see his continued impact in the men he mentored.