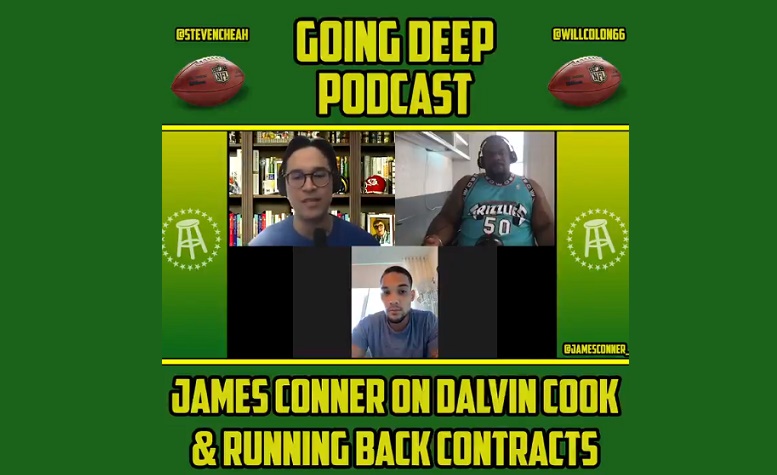 By the looks of things, Pittsburgh Steelers running back Jams Conner won’t get as new contract prior to the start of the 2020 regular season. And if that’s what ultimately happens, Conner will have quite a bit riding on how he plays in 2020, his final year of his rookie contract. Recently, Conner, who is still busy promoting his new book, was a guest on ‘The Going Deep’ podcast and during his interview, he was asked to give his thoughts on Minnesota Vikings running back Dalvin Cook recently saying that he will hold out until he gets an extension and how he feels about his own current contract situation with the Steelers.

“Well, so starting with Dalvin, man, I’m team running back, so I’m going to support, you know, all the running backs in whatever decisions that they make,” Conner said. “Me, I’m prepared, my mindset is just to ball. Now, where if they [the Steelers] come to me with something, you know, we’ll talk. But if they don’t say a word to me, it’s cool. I’m going to play. and I’m going to show them. And so, I support Dalvin, man and everything that he’s doing.”

Conner went on to profess his love for the city of Pittsburgh and his desire to remain a member of the Steelers past the 2020 season.

“I love Pittsburgh,” Conner said. “Like I said, I’m from Erie, Pennsylvania so I’m two hours away. I played my college ball in the city. Would love to be a Steeler for life. I love that organization. And so, you know, we’ll cross that bridge when we get there, but I’m going to lay it on the line for the Steelers and I hope that we can meet and after this season and we’ll see what happens. But I got to perform first and foremost and everything else will take care of itself.”

Conner is exactly right when he says that everything else will take care of itself if he goes out and performs in 2020 much like he did in 2018.

Just because it looks like Conner won’t sign a contract extension later this offseason, doesn’t necessarily mean that he won’t. However, with that said, any contract offer he might receive from the Steelers this offseason isn’t likely to include big money and thus it would likely be in his best interest to bet on himself in 2020 and see if he can parlay a solid 2020 performance into a very lucrative contract in March of 2021.

The Steelers could always attempt to sign Conner to a new contract immediately after the 2020 season ends and before he becomes an unrestricted free agent in March. Even so, it’s hard to imagine such a transaction taking place if he gets that far without an extension in hand. While the team could also decide to use the franchise tag on Conner during the offseason to ensure he stays in Pittsburgh at least one more season, even that seems unlikely to happen as we sit here in late June of 2020.

Conner is an easy player to root for. After all, his backstory is amazing and he’s a product of Pittsburgh to boot. Even with that and his want to be a Steeler for life, the plausibility of him still being a member of the Black and Gold exactly one year from today seems very, very slim. Regardless of how it plays out contractually for Conner moving forward, here’s to hoping he has a fantastic 2020 season for the Steelers and an even better one than he had in 2018.

With Dalvin Cook holding out until he gets a 'reasonable deal', how does another stud RB, @JamesConner_ from his draft class feel about the RB market and his own upcoming free agency?

We talked to the Pro Bowl RB in the latest pod, out now: https://t.co/Wo6btuMkYB pic.twitter.com/EzWKNBGazJ