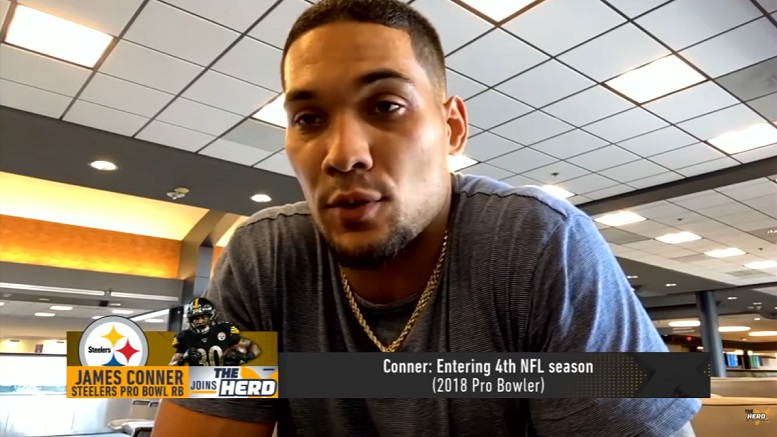 After an injury plagued 2019 season that included him missing six plus games with shoulder and quadricep issues, Pittsburgh Steelers running back James Conner is now looking to rebound in 2020 and have a Pro Bowl season similar to, if not better than, the one he had in 2018 when he totaled 1,470 total yards from scrimmage. Despite the Steelers drafting yet another running back this year, the team has still given every indication this offseason that they believe Conner can resume being their feature back and return to his 2018 form.

So, what does Conner envision his role being in the Steelers offense in 2020 and what does an ideal Sunday look like in his mind? He answered those questions during a Friday book promotion appearance on ‘The Herd with Colin Cowherd.’

“Well, first and foremost, it’s a victory,” Conner said. “You know, it’s always a good Sunday when we win, no matter how much we win by. So, a victory first and foremost. And then it’s a game that the run game was going solid, backs got involved. I believe in my talents. I can get a hundred on the ground. The victory is the most important thing, but as long as we get the run game going and we make some nice runs, couple first downs, that’s all good.”

Conner, who is now in the final year of his rookie contract, only had one game last season in which he rushed for 100 or more yards and that was in Week 8 when he registered 145 yards and a touchdown on 23 total caries in the team’s Monday Night Football win against the Miami Dolphins. That same game, however, was the one in which he injured his shoulder in late and that injury wound up costing him most of his missed games moving forward into the second half of the season.

When Conner was at his healthiest during the 2018 season, he registered five 100-yard-plus rushing games in the team’s first eight contests. With him now fully recovered from his injuries he sustained last season and with him not having to go through the rigors of offseason OTAs and mandatory minicamps this spring and summer due to the coronavirus pandemic, Conner was asked on Friday if this is the heathiest he’s ever felt ahead of training camp getting underway and if in retrospect if him not having to practice this offseason has been a great benefit to him.

“Well, I can handle practice as well, but this free time I’ve definitely been focusing on my body,” Conner said. “I think you’ve got to take advantage of any time that you have off. My teammate at Pitt, Aaron Donald, was telling me, ‘every year you just got to work a little harder.’ So still in a process and I’m still getting better. So, yeah, my body feels good.”

Conner certainly has the table set to prove a lot of people wrong in 2020. A healthy and productive 2020 season for him will undoubtedly result in him getting a huge payday from some team next March. To date, Conner has rushed for 1,581 yards and 16 touchdowns on 363 total carries in the 37 regular season NFL games that he’s played in. He’s also caught 89 passes for another 748 yards and 4 touchdowns since being selected in the third-round of the 2017 NFL Draft out of the University of Pittsburgh.

“The training is going really, really well,” Conner said on Friday. “I’ve been training up in Pittsburgh. I’m headed to Fort Lauderdale to get some training in now. But it’s going great. My body feels great. I feel healthy, so excited about what’s to come.”