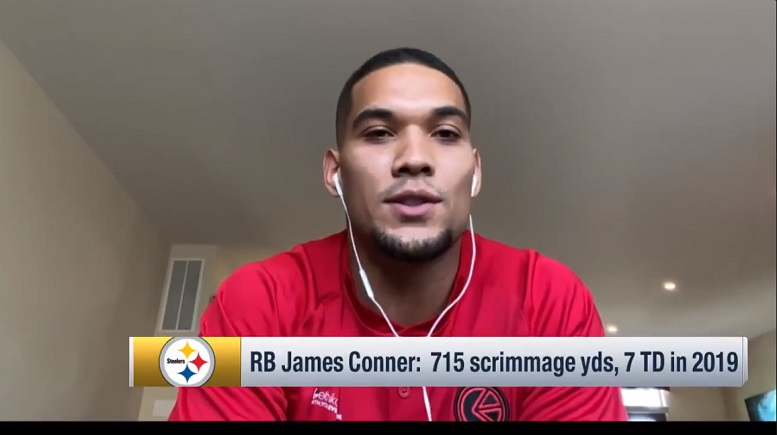 After missing nine plus games in his first three seasons in the NFL due to various injuries, Pittsburgh Steelers running back James Conner has been labeled injury prone by more than just a few people. On Tuesday, Conner, who is making the rounds this week promoting his new book, was asked during an interview on the NFL Network if he has a message for those people that don’t consider him a durable player ahead of the 2020 season.

“Man, all I can do is work,” Conner said. “You know, that’s all I can do. And so that’s what I’ve been doing and something I’m going to continue to do. I think year in and out I’ve shown that I’ve elevated my game in this league. You know, I didn’t come in on fire. I had to sit and wait and watch. And so, I’m just going to try to continue to keep evolving over the years and not really pay attention to what anybody says. My faith is strong. My belief in me is strong.”

That’s about the bet answer that Conner could have given to such a question and judging by his social media accounts all offseason, he certainly has been putting in the work via training, something he also visible did that last two seasons.

After missing the final three games of his 2017 rookie season with a knee injury, Conner returned in 2018 to have a Pro Bowl season even though he did miss another three plus games with an ankle injury. Last season, Conner missed another six plus games with shoulder and quadricep injuries. Those missed games in his first three seasons resulted in Conner failing to qualify for the NFL’s Proven Performance Escalator. That cost him $1.308 million in additional earnings in 2020.

All offseason, Steelers general manager Kevin Colbert and head coach Mike Tomlin have voiced their confidence in Conner for the 2020 season. As for Conner’s injury history, Colbert has referred to the issues the running back has had since he was drafted as being acute ones.

Conner has an especially important season now ahead of him as it’s the final year of his rookie contract. If he can stay healthy and repeat or better his 2018 season, it will likely result in him cashing in big in March as an unrestricted free agent. Right now, however, Conner is just focusing on the 2020 season and not on what may happen come March.

“So, just going to keep doing my thing, man,” Conner said Tuesday. “Keep trying to get better and keep trying to make plays for this team.”