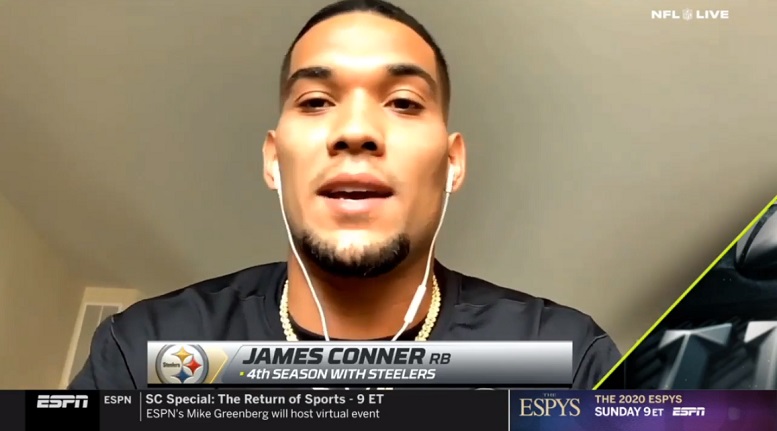 There is a saying that goes, when life gives you lemons, make lemonade. The basic idea is that you work with what you’ve got, and you make the best of it. That’s what professional athletes all over the country have been trying to do while being limited in how, and especially where, they can train.

Players in team sports have been particularly hard-hit by the isolating restrictions of the Covid-19 pandemic that has urged people keep their distance from one another as much as possible. Players have gathered on their own to work out, for sure, but there are no formal practices, at least not yet in the NFL.

There are plenty of ways to keep busy, though, and to keep up training. The Pittsburgh Steelers’ James Conner has found his ways of doing that, as anybody who has seen his back recently can attest. He has given a couple of interviews recently since posting an image of his physique, and he has been asked about it every time.

Appearing on NFL Live yesterday for ESPN, he was asked whether or not the quarantine challenged him to train even harder. “I definitely upped the training a little bit since this quarantine started”, he said.

“I told myself that I’ve got to be better coming out of this thing, so that’s what I did”, the fourth-year back added. “I changed the diet up and been training really, really hard. I’ve been blessed with some good genetics as well, but a lot of hard work went into that, and I’m just gonna keep the hard work going and see what happens from there”.

Entering the final year of his rookie contract, Conner knows that he is in a critical season that will play a big role in determining his financial future. While he has been at times great on the field, injuries in each of his first three seasons—and going back to college—have been a limiting factor.

This year, he is hoping to put in a record season, starting with playing 16 games, something he hasn’t been able to do yet. Even when he made the Pro Bowl in 2018, he missed three games toward the end of the year due to a high ankle sprain.

Certain injuries are unavoidable, to be sure, but maximizing your physical fitness is one of the few things that you can do as an athlete—or just in general—to try to prevent injuries, or reduce their likelihood or severity.

A third-round pick in 2017, Conner has rushed for 1437 yards in 23 games over the past two seasons with 16 rushing touchdowns. He has caught 89 passes for another 748 yards and four touchdowns. In all, he has recorded 2185 yards from scrimmage with 20 scores, and 5.2 yards per touch.