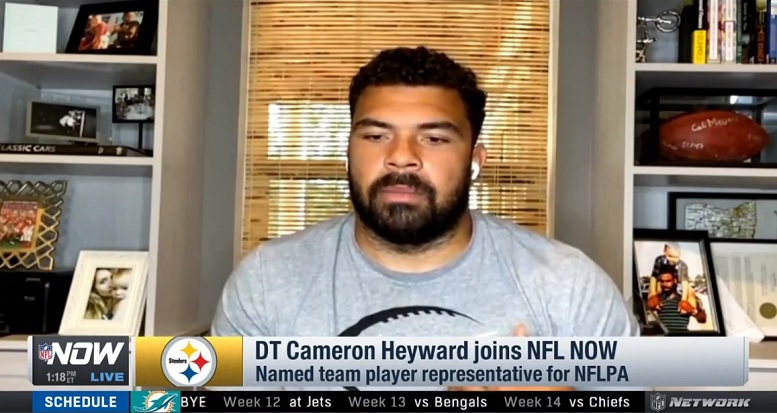 The Pittsburgh Steelers are still scheduled to begin their annual training camp in less than a month on July 28. When and if that ultimately happens and happens on time, a solid plan and agreement will have to be in place between the NFL and the NFLPA that ensures that ongoing concerns related to the continued coronavirus pandemic are best prepared for. Ultimately, a few veteran players around the NFL might decide they don’t want to play in a pandemic environment, much like a few MLB players have already done.

Pittsburgh Steelers defensive tackle Cameron Heyward, however, let it be known during a Tuesday interview on the NFL Network that he currently has no plans to sit out the 2020 season due to pandemic concerns even though he might be a higher risk player due to him suffering from asthma.

“You know, as of right now, I haven’t thought that way,” Heyward told Andrew Siciliano on Tuesday. “Currently, I’ve been working out and just trying to stay ready. But, you know, I have to have these talks with my family and make sure I take every precaution if I’m going to go back. You know, we don’t have a vaccine. We’re still dealing with a lot of testing and things have to fall in place. But I have to do what’s right for my family. I’ve got to make sure I don’t jeopardize them as well as myself.”

Heyward, who is one of the Steelers player reps this year, was also asked on Tuesday if he’s heard from any of his league peers or teammates that they might decide to sit out a 2020 NFL season due to concerns about the pandemic.

“Not at the time,” Heyward said. “Everyone I’ve heard from; it’s just trying to find out more information because they want to get back to football. We’re going to have to be very smart about this. You know, this isn’t a decision that’s made in one to two days. Due to not having a vaccine and still dealing with this, you know, we’ve got to make sure that every player and every family feels safe doing this.”

While Heyward essentially predicted recently that the Hall of Fame game between the Steelers and Dallas Cowboys would be cancelled, now that it has, he said on Tuesday that the league still has a lot of other details to work through before teams are allowed to open their respective training camps at the end of next month.

“I think the first thing to go was the Hall of Fame game,” Heyward said Tuesday. “You know, exposing two teams to being out there before everybody else, especially during this climate, it just didn’t seem like a smart decision. But I know we’ve got to make sure we come to an agreement before anything happens.

“But hopefully in July things start to pick up, whether it’s the protocols being set in place, trying to get guys back as soon as possible. I don’t know how long of a quarantine we will have before we even get to practice, but we’ve got to think about those things. But there are a lot of moving parts. It’s not just a football team, it’s the staff, it’s the workers, the people handling the food. How are you going to handle travel? All these things have to be addressed before a lot of our players are going to feel comfortable with even going out there.”

As the Steelers player rep, Heyward knows that role is more than just a title as with that distinction he must always have the best interest of his teammates in mind.

“I’ve got to think not only about my family, but player’s families as well,” Heyward said Tuesday. “You know, we all have unique situations we all deal with. You know, different medical conditions, whether it’s asthma. I think we have some players who might have other things going on, but I’ve got to think and I’ve got to make sure I relay all the information to my players so they can make the best decision for them and their families.”