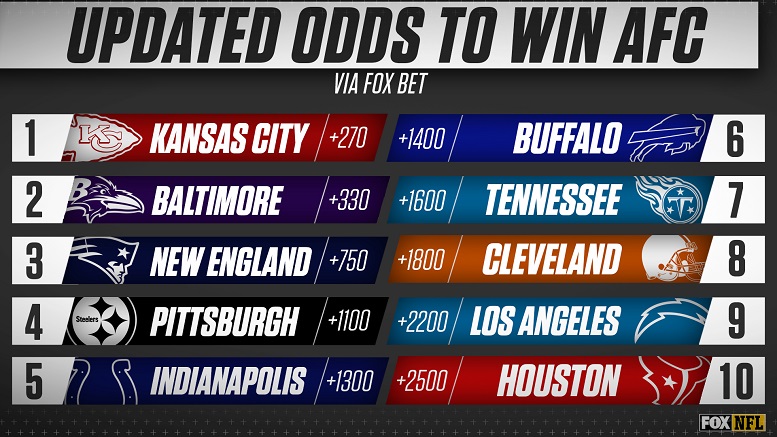 The New England Patriots agreed to terms on a one-year contract with quarterback Cam Newton Sunday evening and that move has resulted in a shifting of the odds in the AFC.

According to latest update by Fox Bet, the Patriots are now +750 win the AFC after signing Newton to a one-year contract. Prior to Sunday, the Patriots were reportedly +1000 to win the AFC, or 10/1.

The Patriots, on Fox Bet, have the third-lowest odds to win the AFC in 2020 after signing Newton and only the Kansas City Chiefs (+270) and the Baltimore Ravens (+330), have shorter odds. The Pittsburgh Steelers, on the other hand, are listed +1100 to win the AFC, according to Fox Bet on Monday.

Interesting enough, the Chiefs, Ravens and Patriots will all play each other once during the 2020 season. The Steelers, on the other hand, are not scheduled to play the Chiefs or the Patriots in 2020. They will, of course, play the Ravens twice in 2020 with the second of the two meetings taking place Thanksgiving night in Pittsburgh. The Steelers first of two games against the Ravens is in Week 7 and will take place in Baltimore.

Six of the first ten games that the Patriots will play in 2020 are against teams that made the playoffs last season. Those six games are against the Seattle Seahawks, Chiefs, San Francisco 49ers, Buffalo Bills, Ravens and Houston Texans.

Should the addition of Newton by the Patriots strike fear into the other top-rated teams in the AFC? Should the Patriots have better odds of winning the AFC than the Steelers with a month to go before training camps open?