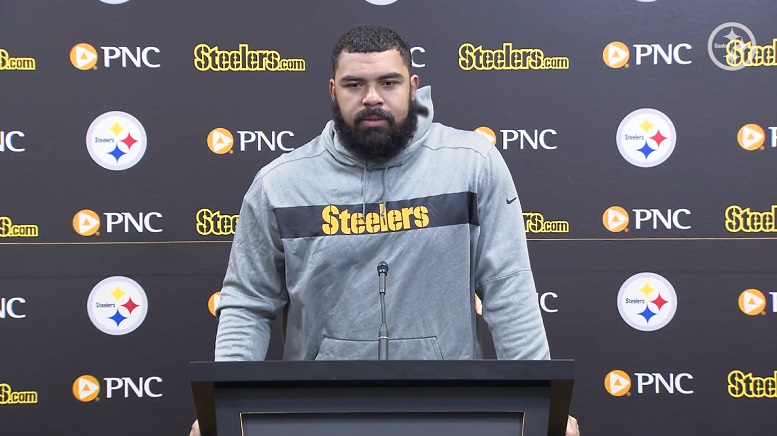 In a mid-March weekly online chat session, Gerry Dulac of the Pittsburgh Post-Gazette was asked when he thinks a contract extension for Pittsburgh Steelers defensive lineman Cameron Heyward might take place and he answered the question with just one word, “Soon.” However, as of the time of this post, Heyward has yet to sign an extension and that now has several foolishly speculating that the Steelers former first-round draft pick and current defensive captain might not ultimately sign a new deal prior to the start of the 2020 regular season. Did I mention how foolish that speculation is?

So, why hasn’t Heyward signed a contract extension yet when it was speculated by at least one veteran Steelers beat writer that he would have by now? For starters, quite a bit has transpired since the middle of March with the coronavirus pandemic obviously being the most impactful thing. The full financial fallout for the NFL from the coronavirus pandemic won’t be fully known for some time but that still hasn’t stopped the doom and gloomers from predicting a huge drop in the league’s salary cap in 2021 due to expected revenue losses in 2020.

While there are sure to be revenue losses for the NFL in 2020, predicting how big those will ultimately be are still ongoing. After all, right now it looks like the 2020 season will be played in full and likely with some semblance of fans in attendance. Regardless, if you think the NFL and NFLPA will just sit back and let nature take its course and let a 2021 salary cap drop occur without a huge fight, you are foolish.

In a recent article on NFL.com, Ian Rapoport, Mike Garafolo and Judy Battista all covered several different scenarios concerning the impact of the coronavirus pandemic on lost NFL revenue in 2020 the impact that could potentially have on the 2021 salary cap. In short, the article states that the NFL and the NFLPA are in serious discussions to come up with a plan that, at worse, would produce an outcome of the 2021 salary cap number staying the same as the 2020 number.

The last thing the NFL and NFLPA wants to happen in 2021 is for the salary cap to decrease any as such an event would surely cost several middling earning players across the league their jobs. Many rosters around the NFL would likely include an even stronger mixture of the haves and the have nots.

Is it surprising that the NFL and NFLPA have yet to come up with a plan such as one that might include future cap dollars being borrowed from to help prevent a drop in 2021 and be potentially followed by a few huge spikes in subsequent years? Absolutely not. After all, we still have more than a month remaining before teams will even begin assembling for their annual training camps. There is no rush to agree to anything right now so that more data can be compiled, and smarter potential economic impacts can be determined. Give the process time.

While these negotiations between the NFL and NFLPA continue, it would be foolish for any of the 32 teams to make huge decisions regarding high-dollar new contracts or extensions for any players because of the ongoing uncertainty surrounding the salary cap landscape starting in 2021. This is probably one of the main reasons why Heyward has yet to sign an extension.

The Steelers defensive captain said as much in a recent interview in The Athletic. In short, Heyward indicated that early offseason contract extension negotiations with the Steelers did take place and then abruptly stopped and probably due to the pandemic and the uncertainly it produced.

While Heyward’s other comments about him not wanting to assume that a contract extension with the Steelers will ultimately get done at some point this offseason are framed as doom and gloom by many, it would be silly for him to guarantee that anything will happen due to the uncertainty that’s tied to us all now living in this new world, so to speak. Heyward not speaking about is contract in absolutes shows just how smart of a veteran NFL player he really is.

While Heyward refuses to speak in absolutes about him potentially signing a contract extension later this summer, I’ll somewhat do it for him. Barring something totally unforeseen such as an unfortunate summertime injury, I virtually guarantee that Heyward will sign a very lucrative contract extension prior to the start of the 2020 regular season.

Like it or not, Heyward’s market value right now is likely somewhere in the $16.5-$18 million range when it comes to a new money average. Sure, Heyward is now 31 years of age, but he’s still in his prime as a defensive player based on his performance in 2019. When it comes to a potential extension for him later this summer, the only questions surrounding it should be the length, total amount of fully guaranteed money and the cash flow schedule. A three-year extension might ultimately be the way things go, but a four-year extension can’t be ruled out so that whatever new signing bonus Heyward receives can be amortized out for five years.

The Steelers and Heyward will likely agree on a deal that’s very fair for both sides which means that the defensive lineman will have a new money annual average of around $17 million. While Heyward’s 2020 salary cap charge of $13,251,250 might not ultimately be heavily impacted by him signing an extension later this summer, you can probably count on an easily manipulated 2021 roster/option bonus being part of a new deal so that a restructure can take place in March should additional salary cap space be needed. That’s what the Steelers do and have done for quite a while.

So, what if my prediction turns out to be wrong and Heyward doesn’t ultimately sign an extension later this summer? Should that be what happens, the Steelers would almost certainly be forced to use their 2021 franchise tag on Heyward to assure that he’s kept at least one more season. This year the franchise tag amount for defensive tackles was $16.126 million, so you can do the math for 2021 from that number.

Being forced to tag Heyward at more than $16 million next February would give the Steelers zero cap flexibility with Heyward’s number until some sort of extension is worked out. Additionally, being forced to use the franchise tag on Heyward would mean they couldn’t use it on a player such as wide receiver JuJu Smith-Schuster, should he not sign an extension this summer and ultimately bounce-back in 2020.

Could the Steelers and Heyward agree to a new contract after the 2020 season ends and before the franchise tag deadline? Absolutely, but odds of that happening are slim and the uncertainty surrounding such negotiations come that time makes it too dicey to predict that such an extension taking place during that span of time would be a forgone conclusion.

In summation, even though he might ultimately be the only Steelers player to sign a new contract between now and the start of the 2020 regular season, expect Heyward to get one barring injury. I fully expect the NFL and NFLPA to come to terms on a plan that will smooth over the 2021 salary cap concerns that’s fair for both sides, all things considered. Such an agreement should allow for the Steelers to resume contract extension negotiations with Heyward and the rest should then take care of itself.

Honestly, can any of you really imagine Heyward not being part of the Steelers 2021 defensive line as we all sit here in early June of 2020? That’s what it really boils down to and why it’s foolish for anyone to write or say right now that Heyward not ultimately having a new deal in place by the start of the 2020 regular season is smart speculation on their own part.