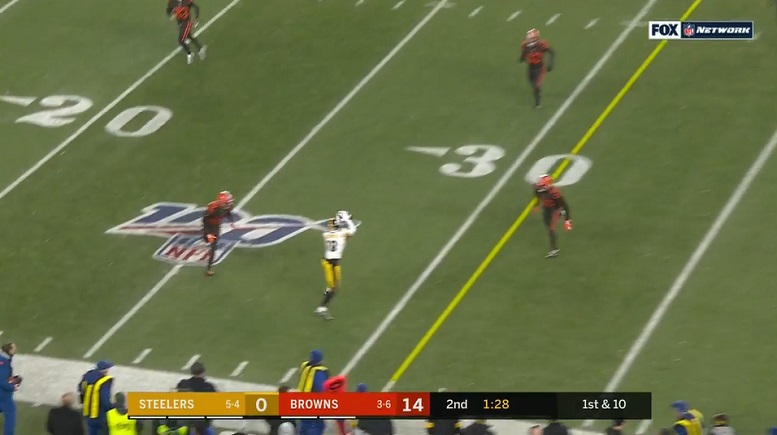 This series will move forward with a look at Johnson’s targets in the Steelers Week 11 road game against the Cleveland Browns. In that game, Johnson had four targets of which he caught two of them for 17 yards. His average targeted distance against the Browns was 11.5 yards past the line of scrimmage and his average completion distance on his two receptions was 7.5 yards past the line of scrimmage. 2 yards were gained by Johnson after the catch against the Browns.

Johnson’s first target and reception against the Browns came midway through the first quarter and on a third-and-3 play. On this incompleted pass, Johnson ran a short comeback route on the right field side. A linebacker rush in the face of quarterback Mason Rudolph got very close at the time of the pass release and it resulted in the intended football falling way short of Johnson.

Johnson’s second target against the Browns resulted in his first catch of the contest. On this second-and-5 play, Johnson ran a short hitch/comeback route on the left side of the formation out of a nasty split. It was a quick timing route and Rudolph had the pass out to Johnson in plenty of time for the wide receiver to make the catch. After the catch, Johnson picked up an additional yard and it set up a third-and-short situation.

Johnson’s third target against the Browns, which also resulted in a catch, was an easy reception on his part on a first-and-10 play. On this plasy, Johnson ran an out-breaking route just past the chains after lining up on the boundary side just outside the numbers. The off coverage by the Browns cornerback on the play allowed Johnson to force the defender to open his hips to the field not long after the snap. This allowed Johnson to easily break toward the sideline very uncontested and Rudolph’s pass easily found its mark for a first down.

Johnson’s fourth and final target against the Browns really want much of a target at all. On this play, a second-and-24 late in the second quarter, Johnson ran a deep route down the right outside against a quarter coverage with the defensive back playing way off. Rudolph, who was flushed right from the pocket after not seeing anything to his left and in the middle of the field, attempted to make a deep throw in Johnson’s direction while on the move. The throw was way to the outside of Johnson , who never went toward the sideline.