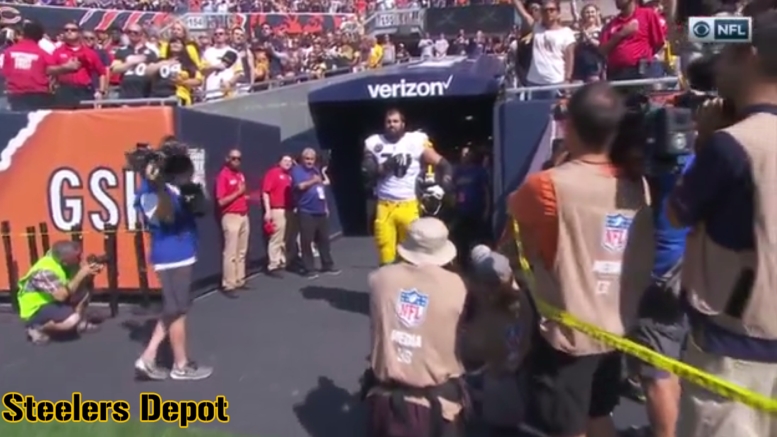 There is perhaps no better example within the Pittsburgh media about how delicate is the structure supporting civic discourse today than the surprise interview with Alejandro Villanueva yesterday on The Fan. Making an appearance for what was supposed to be a surprise for Ron Cook on the Cook and Joe Show, things got a little awkward, and perhaps a little testy.

While there was nothing said or done with ill intent, Cook ending up tossing out a landmine for Villanueva that he had no interest walking over. The host asked him, almost as an aside, about Drew Brees and his initial comments this week in saying that he would never agree with anybody disrespecting the American flag, when asked about players kneeling during the National Anthem.

This was a very hot-button issue during the first term of Donald Trump’s presidency in 2017, and Villanueva ended up walking right into the middle of it when poor management and optics resulted in it looking like he was defying the rest of the Pittsburgh Steelers, who mutually agreed to stay in the tunnel, while he stood just outside the tunnel to salute the flag during the national anthem.

This resulted in several members of the team holding press conferences to address it, including a lengthy one from Villanueva, which he was not at all happy about doing. So when Cook sprang the Brees subject onto him, he had a certain reaction to that.

“Oh my goodness, are you kidding me?”, he said. At a later part of the interview, with his host saying that he would like to know what he thinks about it because he was a war hero, he said, “no, no, no, I’m not a war hero. You’re ambushing me right now about something that was supposed to be a surprise for Ron. Everything with the media, words taken out of context. They were taken out of context the last time I spoke about this issue, so I’ll never speak on it again”.

Villanueva took some criticism for this, but in his defense, he clearly didn’t expect to be asked about Brees, and this wasn’t something that was planned, since Cook didn’t even know that he would be on the show. Cook’s original question was not asked with any specific intent, either. But it’s understandable how things went down.

I do have to give major props to the big man, however, for namedropping a fantastic Sidney Lumet movie. “I watched one of the most amazing movies that I’ve ever seen in my life over the weekend, and I felt like it was an antidote for all of the anger that you see every time you turn on the tv”, he said. It’s a move that came out in 1976 called Network”.

“I’m gonna blame the media because the media’s always trying to hyperfocus things, pit people against each other, change narratives”, he added. “The media is unbelievably divisive right now. It’s exactly what Howard Beale [the main character in the movie] was trying to warn us against”.

I want to point out that this was a very informal and friendly chat. Villanueva has been a frequent guest on the show and they have a good relationship, and frankly, other than on this topic, I don’t think I’ve ever heard him more laid back. In fact, he sounded like he was a few drinks in, though that couldn’t have been the case because he was driving at the time.

And hell, while I’ve got you here, if you’re still reading, here are a few more Lumet films to watch: 12 Angry Men; The Fugitive Kind; Fail Safe; The Pawnbroker; The Offence; Serpico; and Dog Day Afternoon.