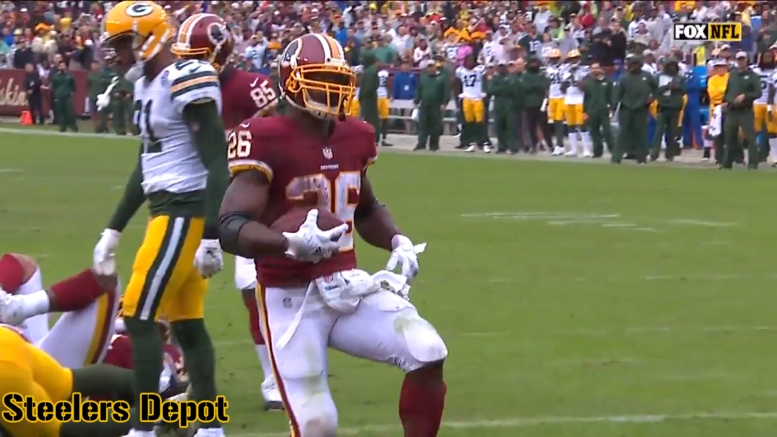 If I had to guess, James Conner really likes and agrees with what Adrian Peterson has to say. Peterson was part of the golden age of running back contracts, signing two mega deals by today’s standards. These days, running backs are among the least valued positions, teams rather drafting or using a committee than making a major financial investment in a player.

Speaking with TMZ, Peterson criticized the league for the way the RB market has unfolded.

“It’s disrespectful to be honest with you. It really is.”

Peterson was drafted by the Minnesota Vikings in 2007, an elite, rare talent. That was prior to the 2011 CBA that slotted rookie contracts. Those days, there were very little restrictions on rookie deals, causing numbers to balloon and Peterson signing a five-year, $40.5 million contract. After emerging as one of the best backs in football, he signed a six-year, $86.3 million extension in 2011, an average yearly value of over $14 million.

Compare that to today where the top back in football is Christian McCaffrey, who just inked a deal that’ll pay him over $16 million per season. Only Zeke Elliott makes more than Peterson’s average yearly value, despite inflation and the cap leaping from then ($120 million) to now ($198 million).

Peterson is optimistic markets will shift in the coming years.

“I think the change is going to come,” Peterson said. “Me and Frank Gore continue to show guys, ‘Hey, we are valuable. We can have 10, 14-year careers as well, so value us as well like you would value a quarterback, you know?'”

It’s hard to share such optimism. Especially in the current climate with an uncertain future. It’s unlikely the cap drops off a cliff like some have speculated but even stagnation won’t help running backs looking to get paid, as teams try to secure their most important positions like quarterback, cornerback, and pass rushers. Even before the COVID crisis, teams have become unwilling to sink lots of money into running backs for fear of durability concerns. Players like Gore and Peterson have become the exception, not the rule, and even they’ve bounced around from team to team.

Conner will be one back looking for a long-term deal this upcoming offseason. Injuries have made him a tough player to invest in long-term and odds are low the Steelers offer an extension unless Conner is willing to take a deep hometown discount. Foremost, Conner must have a bounce-back 2020 to boost his value to the rest of the league, if not Pittsburgh.

And those who do get paid, like any athlete, must invest that money wisely and make sound financial decisions. Peterson lost nearly all the money he made over his career due to, according to him, trusting the wrong people, and nearly going broke because of it.