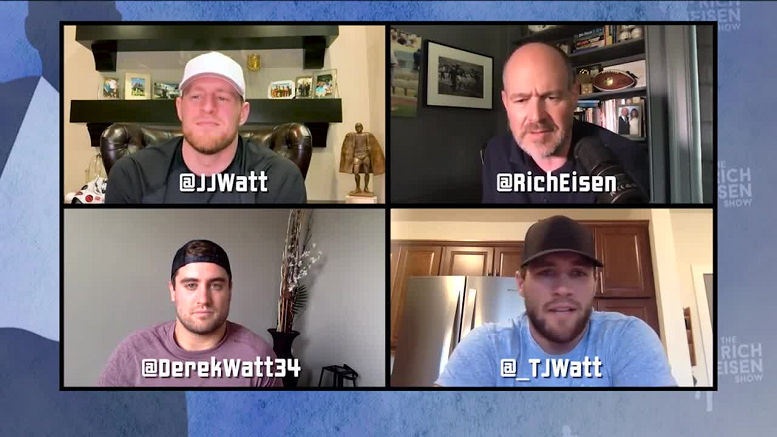 For the past few years, the most controversial topics for the Pittsburgh Steelers have been generated by former players, or soon-to-be former players. Outside of Ben Roethlisberger’s evidently newsworthy new ‘do, much of the past week has been driven by James Harrison’s claim that head coach Mike Tomlin once supplied him with an ‘envelope’ to help ease the burden of being handed a $75,000 fine.

With the Watt brother’s new television show debuting last night, understandably, T.J. Watt was subject to interview. And, necessarily, he was asked about the Harrison incident, even though that happened several years before he was drafted.

Appearing on the Rich Eisen Show with his siblings, he was asked by his host if he had ever seen Tomlin do anything similar to what Harrison had described. “I have not. And like said, I wasn’t anything associated with the organization 10 years ago”, Watt told him.

“Coach Tomlin’s a stand-up guy”, he added. “He’s always been very [good] to me and the whole team. And the number one thing that I love about him is his transparency. He treats everybody fairly and he’s just a great player’s coach, but I do not see him doing anything like that, and I have not”.

As you’ll recall, Harrison, who earlier this month appeared on the Going Deep podcast with former teammate Willie Colon, told his hosts that, after he was fined $75,000 for an illegal hit on Cleveland Browns wide receiver Mohamed Massaquoi, Tomlin gave him “an envelope”, with the strong implication being that it contained money.

After the story blew up a week later, he responded, but did not in any way deny that Tomlin gave him money. He instead objected to the insinuation that that payment constituted a ‘bounty’ with the intention of injuring a player.

He argued implicitly, instead, that the organization supported him and agreed that his hit was not illegal (they did essentially say as much, and Harrison told Colon that Kevin Colbert, whom he described as “an assassin”, accompanied him to his appeal hearing).

Watt, who was drafted in the first round of the 2017 NFL Draft, effectively supplanted Harrison that season as a rookie starter. He didn’t even spend a full year in the same locker room together, as the veteran would later be released. He has, however, had over three years with Tomlin.

“He has total control of the whole team and is great leader”, Watt said of his head coach, “and always knows what to say and what to do in every situation. But I do not see anything like this happening with him”.

While Tomlin has not directly commented on the envelope story, Art Rooney II issued a strong denial on the team’s behalf, and expressed incredulity as to how Harrison concocted the story in the first place.