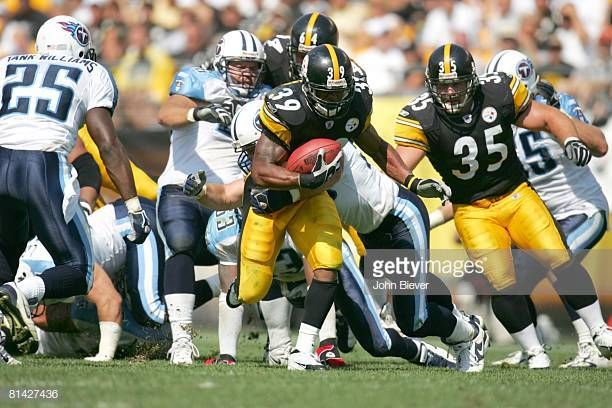 Last week I wrote about Willie Parker’s first career 200-yard game in a 38-31 win over the New Orleans Saints in 2006. This week, I had full plans to write about Parker’s second career 200-yard game, which came a few weeks against the Cleveland Browns at Heinz Field, but after diving into some old-school tape on the Steelers, I decided to change it up a bit.

Let’s flash back to Parker’s first career start as a Steeler, a 34-7 win to open the 2005 season at home against the Tennessee Titans.

With Jerome Bettis on the shelf to open up his final season, the Steelers turned to Parker, who put on a show in front of his home fans, rushing for 161 yards and a touchdown on 22 carries, adding one catch for 48 yards, showing off his homerun speed.

Right away, Parker showed off his blazing speed in the open field, taking this screen from Ben Roethlisberger 48 yards down the left sideline, setting up rookie tight end Heath Miller’s first career touchdown.

It’s quite exhilarating to see Parker’s speed in the open field once again. Those long strides chewed up yards, and check out future Hall of Fame guard Alan Faneca out front leading the way.

Against the Titans Parker started fast on the ground, ripping off this run for 25 yards to midfield. Later in the same drive, Parker chewed up 15 yards off right end.

Just look at the elusiveness and power from Parker. He was such a joy to watch then, and seeing it on film again some 15 years later still makes me jump out of my seat.

Then, to cap it all off, Parker bowled through a handful of tacklers on this 11-yard touchdown, putting the game away for good.

The 34-7 win by the Steelers, aided by Parker’s first career start, eventually resulted in a Super Bowl win over the Seattle Seahawks.

In his first year as a starter, Parker rushed for 1,202 yards and four touchdowns on 252 carries, providing the lightning to Jerome Bettis’ thunder in 2005.