You can run, you can hide but eventually father time gets us all. There is no exact science that gives an exact age in which father time strikes, especially for athletes. For some it may be in their early thirties, others near their forties and then there are cases of athletes playing well into their forties. The Pittsburgh Steelers should have a lot of vested interest in monitoring father time’s approach when it comes to their quarterback Ben Roethlisberger.

Roethlisberger will enter the 2020 season at 38-years old and fresh off an elbow injury that sidelined him for majority of last season. The Steelers have spoke confidently in their belief that their franchise quarterback can return to the field and recover completely from his elbow injury which just leaves concerns about his age remaining. 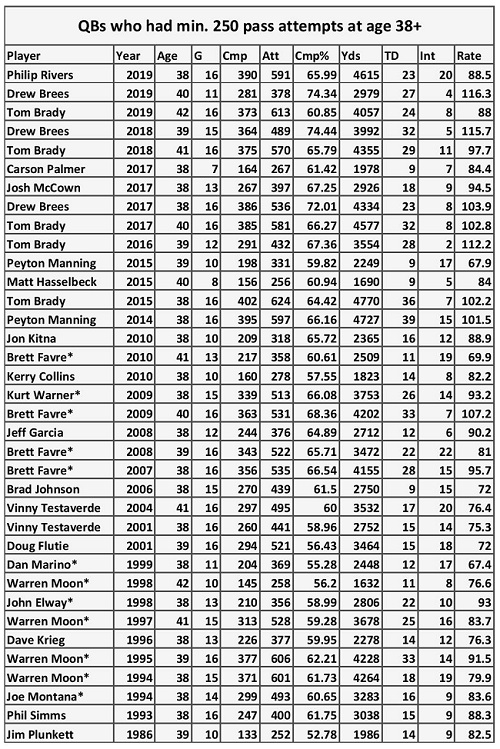 There have been 39 seasons in which a quarterback aged 38 or older has thrown at least 250 passes in a season since 1970. Quarterbacks from all eras are included and there has been an influx of 38+ year old quarterbacks recently likely due to recent rule changes implemented to protect the quarterback.

So, what is there to take from the data? The average for all 39 seasons comes out to a 62.7 completion percentage, 20 passing touchdowns, 12 interceptions and a 87.4 passer rating. These would be very pedestrian numbers in today’s game. Instead let’s look at how often a quarterback has been able to post a passer rating of 90.0 or higher at age 38 or later. 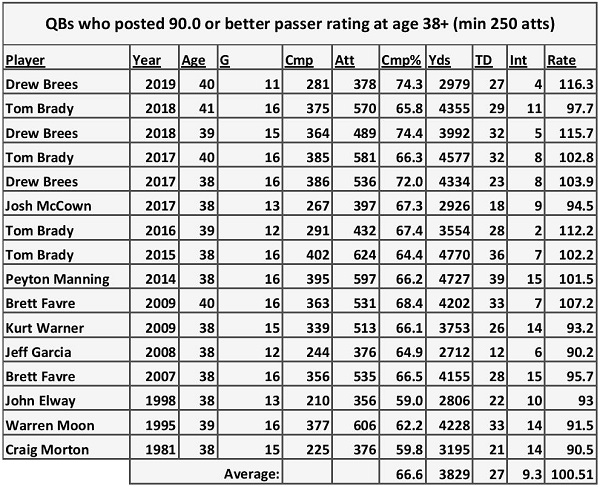 Turns out in 16 of the 39 seasons listed, quarterbacks aged 38 or older were able to post a passer rating of 90.0 or higher. That works out to 41-percent which is not a worrying number. What should be mentioned though just for clarity purposes is that eight of the 16 seasons belong to just three quarterbacks – Tom Brady, Drew Brees and Peyton Manning.

When narrowing the goalposts in order to only look at age 38 or older quarterbacks since 2007, the numbers become even more reassuring. There were 22 seasons in which a quarterback aged 38 or older threw at least 250 passes since 2007 and 13 of them resulted in seasons with a passer rating of 90.0 or better.

There is no doubt that quarterbacks have aged remarkably better over the last decade or so, that should bode well for Roethlisberger. There is no reason to believe that he cannot be an effective quarterback at age 38 or older except for the fact of his recent elbow injury.

That elbow injury will likely be the deciding factor in determining whether Roethlisberger follows the likes of Brady and Brees or whether father time catches up to him. Should he step on the field and show similar velocity and arm strength, there is a good chance the Steelers could see Roethlisberger show great success at the age of 38.