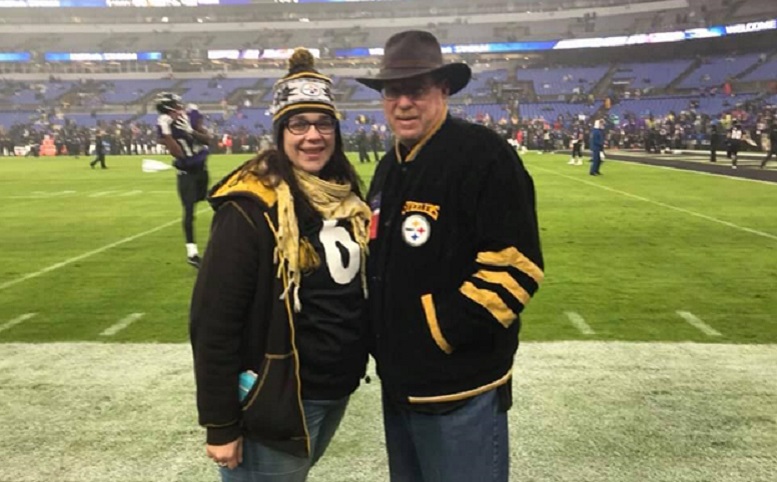 I manage large scale commercial building projects in Baltimore Maryland for one of the Nation’s largest community colleges.  I had never been to a live NFL game.  I was born and raised in Fayette County Pennsylvania and am a rabid Pittsburgh Steelers fan. In early December of 2019, a contractor, who is working for me, approached and asked if I would be interested in attending the season finale game against the Baltimore Ravens here in Baltimore.  How could a guy say no?

I was gifted not only 2 tickets to the game, but these tickets were in a corporate suite.  The package came with a parking pass and a pre-game on field pass.  I surprised my daughter Hayley with the tickets and passes as part of her Christmas.  She had been in and out of our life for many years and I was grateful to have this experience to share with her.

My daughter, being a fashionista, took days deciding on what she was going to wear and experimented with several different combinations and outfits.  She finally settled on an ensemble after a few days.  All black and gold of course.

We arrived at the stadium parking lot about two hours ahead of when the gates would open.  I wanted to experience the whole tailgate and pre-game experience.  There were fans of all types out in full force cooking and partying.  We visited several groups of Steelers fans and were welcomed like long lost friends.  We shared some of their food and enjoyed the company. Steelers Nation was out in full force with some awesome food! There was a live band and it was a party atmosphere despite the weather.

The local rock station, 98 Rock, had a live pre-game show going on and my daughter was astonished when I high fived the DJ and was invited up on stage and interviewed live on the air.  She didn’t know at the time that I have known the DJ for years.

We entered the stadium when fans were permitted to enter.  Being in construction, I enjoy seeing buildings for what they are, structures. We walked around and admired the stadium, the atmosphere, and the people.  There were many Steeler fans at the game and each time we encountered a friendly fan, the greeting was HERE WE GO!  We walked around the concourses and made our way up to the suite.  I had no idea how nice the suite would be!  The inside of the suite was fully equipped like the nicest man cave would be.  Flat screen TV, comfortable seating, full restroom facility and catered.  The food was outstanding!  There was so much to choose from, and I did my best to sample everything.  There was also a fully stocked bar.  We don’t drink but it was part of the experience and worth mentioning.

The suite had an attached, covered balcony where you could go outside and watch the game.  It was several levels up and positioned at the 40-yard line, the view was awesome.  It was fortunate the viewing balcony was covered because the weather was a heavy mist, light rain all day and into the evening.  Kick off was at 430 for this game.  Temperatures were in the 30’s.

We were taken in a group down on the field on the sideline during player warmups.  We were positioned on the Steelers side!  We watched the players going through their pre-game drills and the quarterbacks playing toss with the receivers.  I was able to make eye contact with head coach Mike  Tomlin and wish him good luck and got a head nod in return.  My daughter was fixated on Juju her favorite player.  During our walk along the stands heading out to the sidelines we encountered many Steeler fans.  The Duck heads and Terrible Towels were on prominent display.  Steeler fans certainly travel well.  The sheer size of the stadium and the field are not truly understood until you can stand on the field.  These places are huge.

We returned to the suite and prepared for kick off.  We met the remainder of the group, mostly contractors and architects whom I was familiar with.  It was a cold, wet and miserable night in Baltimore with a steady light rain during the game.  I took advantage of the protected balcony and watched the game from outside while my daughter watched from both inside the suite and outside on the balcony with me.  I think she was trying to soak up the entire experience.  Hayley, being the social butterfly, was making new friends and enjoyed the entire experience of being in an exclusive suite.

It was evident early on that the Steelers were over matched in this game.  The Ravens were clearly the better team.  The play of the Ravens offense was crisp and efficient even with a backup quarterback while the Steelers seemed to be playing third string and practice squad guys.  The game wasn’t very exciting from a Steeler fans perspective but the atmosphere in the stadium was electric. The fans were loud and vocal, quick to cheer the Ravens and boo the Steelers. The electronic score boards with their digital graphics were impressive. The Ravens Marching Band played at halftime and their choreographed movements were fun to watch.

The result of the game was never in doubt.  We knew the game was sealed early in the fourth quarter and decided to leave with 7 or 8 minutes remaining.  The walk to the reserved parking area was short and we were able to beat the heavy crowds and traffic leaving the stadium.  We spent the drive home talking excitedly about our shared experience and being grateful for the opportunity

My daughter passed away in February almost exactly two months after the game.  I miss her terribly and wrote this piece to remember and memorialize the experience we shared on a cold and miserable night in December.  We were able to laugh and spend quality time together.  We were able to bond as a father and a daughter.  We were able to share our love and passion for the Steelers.

The photo that accompanies this article was taken along the sideline the evening of the game.  It is one of several of us together that evening and is my most prized possession.  The look of happiness on her face is evident.  I know that she had a great time at the game, and I am truly grateful for this opportunity to spend time with my first-born child.

I don’t believe any parent is prepared for their child to die before them.  It’s not the natural order of things.  My wife and I have done our best to move on without Hayley.  It is the most difficult thing I have ever tried to do.  Having and sharing memories like this is my way of both moving on and remembering.  Thanks for sharing my memory with me.