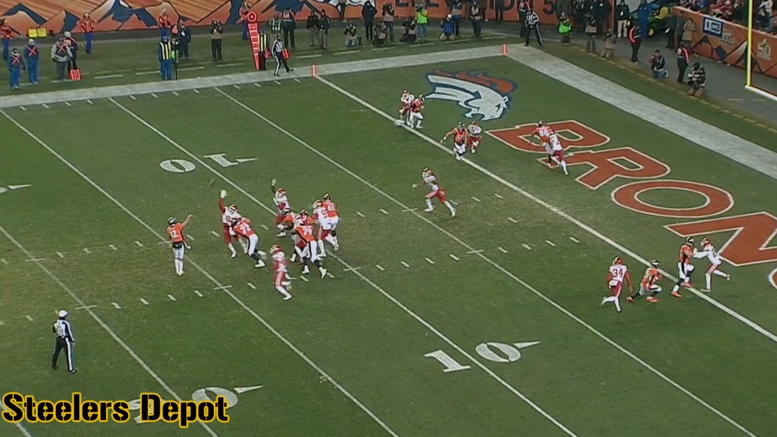 Earlier in the week, we had some back-and-forth dialogue about Paxton Lynch, who served most of the 2019 season as the Pittsburgh Steelers’ number three quarterback. After losing out to Geno Smith to serve as the backup behind Russell Wilson for the Seattle Seahawks, he found himself on Pittsburgh’s practice squad a couple of weeks later.

That was after the Steelers traded Joshua Dobbs for a fifth-round pick between week one and week two, which prompted them to sign Devlin Hodges to the practice squad. Lynch remained a free agent then. A week later, Ben Roethlisberger went down for the season, forcing them to promote Hodges to the 53-man roster as Mason Rudolph’s backup.

At the same time, they went out and signed Lynch off the street, who remained available through the first two weeks of the 2019 regular season. Though it is very much against their norm, he spent three weeks of the practice squad as the number three quarterback, only promoted ahead of the Week Six game against the Los Angeles Chargers, because Rudolph had suffered a concussion and missed the game; thus he had to be the backup to Hodges.

Long before that—or at least, seemingly long—Lynch was the 26th-overall pick in the 2016 NFL Draft, the future franchise quarterback for the Denver Broncos, who traded up from 32 to get him as the successor to Peyton Manning.

After losing out to former seventh-round pick Trevor Siemian in 2016 and 2017 for the starting job, the Broncos resorted to free agency to bring in Case Keenum to be their starter on a two-year, $36 million deal that included $25 million fully guaranteed at signing.

You don’t guarantee $25 million to a quarterback you’re bringing in only to compete. Said Keenum during OTAs that year of, for the first time in his career, going into a season knowing that he was the undisputed starter, “it feels good; I like it”.

“There’s some comfortableness with that and puts some things at ease and lets you go out there and play, lets you cut it loose”, he added. He added that he still wants to “earn every right” that comes with being a starting quarterback, even though he had already been awarded that distinction.

“This is Case’s first chance to really be the guy”, Broncos coach Vance Joseph said at the time, “so, he’s excited, I’m excited for him. For his entire career he’s been a backup and become the starter because of injury most of the time. This is his first time being the guy”.

So, after two years of losing competitions with an inexperienced seventh-round pick, the Broncos turned to free agency to find their starter in Lynch’s third offseason. Unfortunately, it got worse from there, because he would be beaten out by another seventh-round pick.

Chad Kelly, taken 253rd overall in 2017, spent his rookie year on injured reserve, but he was awarded the backup job over Lynch due to his play in the preseason. “Chad’s earned the right to be our number two at the moment”, Joseph said in mid-August. “The depth chart is fluid, and it rewards guys who are playing well”.

Nevertheless, the Broncos maintained that Lynch would stay on-board as the number three quarterback, due to Kelly’s inexperience. He made the initial 53-man roster—but then Denver claimed former fifth-round pick Kevin Hogan off waivers, and released their former first-round pick ahead of his third regular season, with general manager John Elway saying that “it’s best for everyone to make this move”.

Nevertheless, Lynch would go unsigned for the entire duration of the 2018 regular season, and even when he made the initial 53-man roster, it was spoken of as conditional. “I thought at this point in time that’s the best decision for us”, Elway said of keeping Lynch due to his knowledge of the system relative to Kelly’s inexperience.

“Paxton continued to improve, but he is the third-string quarterback”, he added. “Looking at it, looking at the situation, with Chad not having a lot of experience and not having played a regular-season game before, we felt like we had to go with three quarterbacks, and Paxton was our third one”.

In spite of the fact that Kelly would be arrested in October that year and released, the Broncos showed no interest in re-signing Lynch, settling with Hogan as their backup for the rest of the season, and signing Garrett Grayson to their practice squad to take over the number three role.