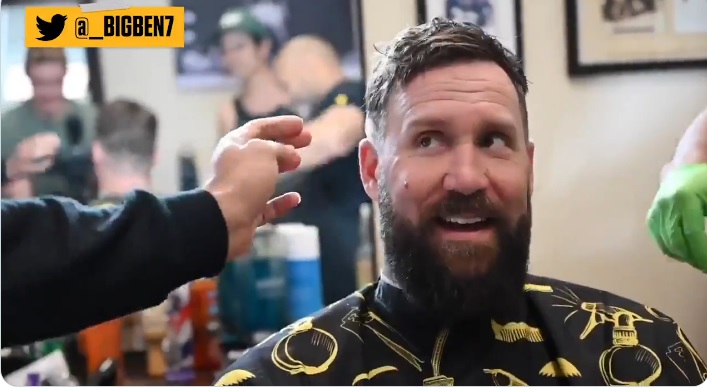 There was plenty of excitement about Ben Roethlisberger’s video released yesterday, showing him throwing NFL-caliber passes for the first time since his season-ending elbow surgery last September. In celebration of that achievement, as Roethlisberger has insisted he planned to do, he cut his hair and trimmed his beard. That normally wouldn’t raise any eyebrows but in the middle of the COVID pandemic with barbershops closed, it’s created a bit of a controversy.

Including from Pennsylvania governor Tom Wolf, who was asked about Roethlisberger attending Norman’s Cut ‘N Edge, a Sewickley (that’s in the suburbs of Pittsburgh for those wondering) barbershop to get cleaned up.

Here’s what Wolf said during a Tuesday press conference.

Here is Pennsylvania governor Tom Wolf being asked about Ben Roethlisberger and his trip to the barber shop during his Tuesday briefing: #Steelers pic.twitter.com/0hWPYnHpuW

“My concern is a general concern,” Wolf said. “Anyone who puts himself or herself in harms way is something that we ought to try and avoid. When you go to something like a barber shop, I don’t care who you are. The chances of that virus wreaking havoc on your life increases. I don’t think any Pennsylvanian should take that chance.”

While Roethlisberger wasn’t shown wearing a mask in the clip (he was getting his beard trimmed in that moment) it appears his cameraman was and the barber had on a pair of gloves. Not everyone, however, was. As you can tell in this photo.

According to the barber shop’s website, they state they remain closed until given the green light to reopen. Roethlisberger appears to be a special exception so it isn’t as if customers were coming in and out throughout the day.

Western PA has slowly been reopening over the past ten days. Northern PA counties, like Clarion and Erie, moved to the “yellow” phase first with more southern counties like Allegheny and Westmoreland taking that step last Friday. Under that phase, places like barbershops and nail salons were to remained closed. Aside from Beaver County, in large part due to an outbreak of the disease at one nursing home, Western PA has seen a relatively low number of cases compared to places out East like Hazleton and the Philadelphia area.

UPDATE (8:03 PM): Per ESPN’s Brooke Pryor, shop owner Carlos Norman released this statement. He says his shop was closed to customers and Roethlisberger’s haircut was done as a favor without pay.

Norman says the shop remains closed and the haircut was given as a “personal favor” where no money was received or exchanged. pic.twitter.com/IREjJJsoQk