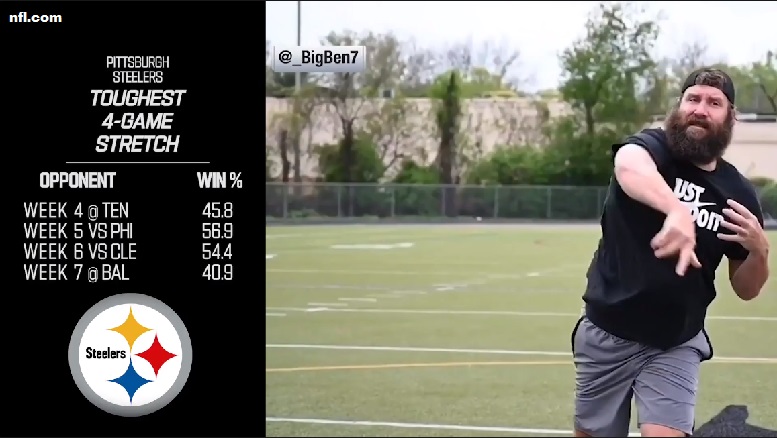 Here is what Frelund had to say about that entire four-game stretch for the Steelers:

“Ben Roethlisberger returns to the Steelers lineup in 2020 after missing 14 games last season due to an elbow injury. Pittsburgh needs their leader on offense back in peak form as the offense struggled without him. The Steelers fell from fourth in total offense in 2018 with Big Ben all the way to 30th a season ago. Ben will be tested early in the season as Pittsburgh’s toughest four-game stretch comes in Weeks 4 through 7. It starts with a trip to Nashville to face the Titans in a battle of physical teams. The Steelers are not favored in that spot on the road, but then they come home for two games where they do have an edge against their instate rival Eagles and division rival Browns. The difficult stretch ends with another road game, this time traveling to face another AFC North rival in Lamar Jackson and the Baltimore Ravens. It helps that the Steelers have their bye in Week 8 after the Ravens game. This will give them a chance to get healthy and if they make it through this stretch in good shape, they’ll be in contention for a return to the playoffs in 2020 as they are currently my first choice for an AFC Wildcard.”

That four-game stretch chose by Frelund is certainly a good one as we’ll learn quite a bit about the Steelers through that span of contests, two of which are against teams in their own division. None of those four games are primetime games and all have the same 1:00 PM ET start times on a Sunday. The longest distance traveled by the Steelers during that four-game span is just 462 miles.

As Frelund wisely points out, the Steelers tough four-game stretch that she highlighted ends with the team heading into their bye week. Hopefully, they will have completed that four-game stretch with at least three wins with two of them coming against the Browns and Ravens.