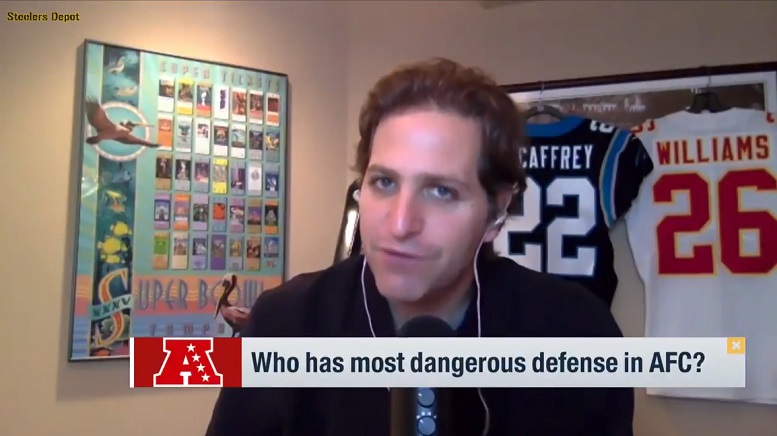 How good will the Pittsburgh Steelers defense be in 2020? Can they be the top defense in the AFC in 2020? At least one member of the Good Morning Football crew thinks there’s a good chance of that happening.

After GMFB co-host Kyle Brandt explained Monday morning on the NFL Network why he thinks the Los Angeles Chargers defense has the most dangerous unit post-draft, fellow show co-host Peter Schrager gave his lengthy reason as to why the Steelers are his choice to be the best AFC defensive unit in 2020.

“I look at the Chargers [defense] and it’s great on paper and they’ve put some stuff together and they won a playoff game a few years ago, and then I look at one of the hardest hitting teams in cold weather with the fan base, with everyone returning, the Pittsburgh Steelers – don’t be fooled – have a nasty defense,” Schrager said. “I’m talking Cam Heyward, who should be an All-Pro every season. I’m talking about a Watt brother that might not tweet as much, or have as many endorsement deals, but could have been the Defensive Player of the Year last year in T.J. Watt. Devin Bush, one of the best inside linebackers in all of football right out of the gates last year, and of course a defensive backfield that has Joe Haden, Minkah Fitzpatrick and Terrell Edmunds. Oh, and not to mention Mike Hilton at the nickel, who might be the best nickel in all of football.”

“This Steelers defense last year kept them in every game of the season and willed them to victories,” he said. “I mean, they lost games last year in crazy fashion. To the 49ers, despite causing five turnovers, and then in that game against Buffalo on a Thursday night, that defense was as hard hitting as anyone. The offense just could not do anything. You add in Ben Roethlisberger healthy, you bring back all of these guys on defense and then you add things like some other people on the outside doubting whether the Steelers will be back – give me the Steelers defense to return of the Steel Curtain and I will not want to face them this season.”

That’s a well-reasoned argument by Schrager. after all, the Steelers figure to have nearly all the 2019 defense back in 2020. While inside linebacker Mark Barron and defensive tackle Javon Hargrave are the two primary players who logged quite a few snaps in 2019 that are no longer on the team, only the latter is a big loss. Additionally, the Steelers should have defensive end Stephon Tuitt back healthy again in 2020. He was having a monster 2019 season until an injury ended it in Week 6.

Last season, the Steelers defense not only led the entire NFL in sacks with 53, that unit also registered a league-best 38 total takeaways. That unit posted a 4.7 adjusted net yards per passing attempt stat in 2019 that was fourth lowest in the NFL. The Chargers defense wasn’t anywhere close to the Steelers stats in those various categories last season.

Baring multiple injuries in 2020, it will be very disappointing if the Steelers defense isn’t one of the top two units come the end of the season. Having a better Steelers offense in 2020 to compliment the team’s defense should also help matters as well.

As for the other GMFB co-hosts, Nate Burleson and Kay Adams, they have the Kansas City Chiefs and New England Patriots, respectively, as their choices for the most dangers AFC defense in 2020.