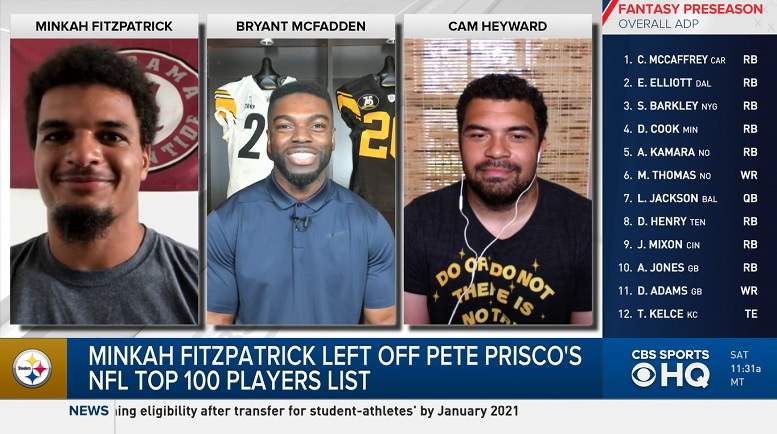 If you missed the news that’s taken over Steelers’ Twitter the past few days, CBS’ Pete Prisco left Minkah Fitzpatrick off his Top 100 list. Fitzpatrick is using that snub as offseason motivation. Joining Cam Heyward to talk with CBS’ (and former Steelers’ corner) Bryant McFadden on CBS Sports HQ, Fitzpatrick offered his reaction to Prisco’s list.

“Usually I don’t pay attention to the the media stuff and this and that because, you know a lot of it is just opinion and everybody has bias and different stuff like that,” Fitzpatrick said. “I seen it when it first came out and honestly, I laughed at it. Not in a disrespectful way, but I was just like, no, it’s whatever, he’s entitled to his opinion. He thinks he’s right and all this other stuff. And then I was actually like, I was trying to get myself fired up. I was about to go work out right. And I tried to get myself fired up. I just needed a little fuel. And so I kept watching the video, you know what I’m saying? To get myself hyped up for the work out and get ready. And then I was just like, no, I’m going to say something.”

This is what Fitzpatrick tweeted back.

No one agrees w you. But i appreciate the fuel https://t.co/Bdn0JZfWE1

Fitzpatrick was an All-Pro last season, in play and in offseason honor, tying Joe Haden for the team lead with five interceptions. Fitzpatrick became the first Steeler to record 4+ interceptions since Troy Polamalu in 2010, breaking the longest drought in NFL history.

With big plays, a low missed tackle rate – just 10% – he’s a no-brainer to be included somewhere in the Top 100. Prisco argued his play wasn’t good enough, a statement that can only be true if you simply didn’t watch Fitzpatrick and the impact he made on Pittsburgh’s secondary.

Opposing offenses sure knew. Over the final eight weeks, Fitzpatrick was targeted just twice. Quarterbacks simply stopped throwing the ball anywhere near him.

“I was just looking at his stats not even long ago, five picks, tied for second in the league, two TDs, two forced fumbles, three forced recoveries, you name another player in the top 100 who did that. I think I can’t name a hundred players better than him and for him to leave Minkah off was dumbfounding to me.”

While most players wisely tune out outside criticism as noise, that’s all it is, he compared using these slights as motivation just in the way Michael Jordan did, as explored in The Last Dance documentary.

“We’ve just seen with the MJ documentary how he used people’s opinions and people’s words against him. You know what I’m saying? I think it’s sometimes it’s, beneficial to just to use it as motivation.”

McFadden joked Fitzpatrick should put a photo of Prisco in his locker room. Fitzpatrick said he might take him up on the idea.

Regardless of what any meaningless, arbitrary list says, Fitzpatrick is a Top 100 player in football. With a season under his belt and comfort and security knowing his role in 2020, there’s a chance he’ll be an even better player. A scary thought for the quarterbacks who have to face him.