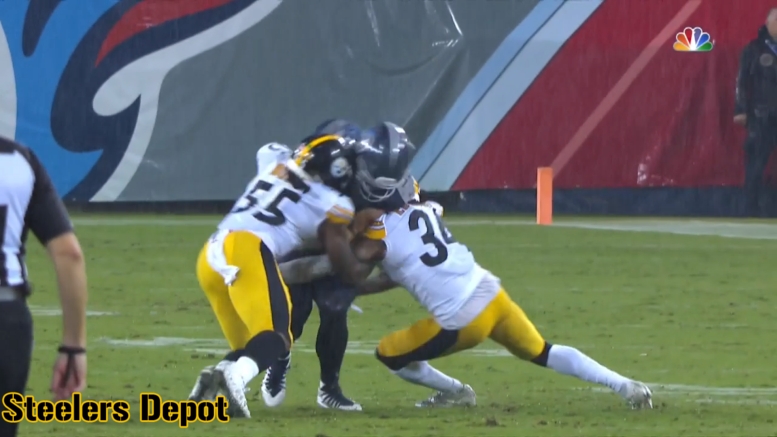 Mike Tomlin has been preaching for many years about how the game is increasingly becoming about sub-packages and specialized roles. It took a couple of years for his practice to catch up with his preaching, but we have seen more niche roles from time to time in recent seasons.

This has been a topic recently with the drafting of safety Antoine Brooks in the sixth round, whom general manager Kevin Colbert called half a linebacker and half a safety. And the Steelers have clearly looked for a ‘dimebacker’ type of player before.

Colbert was recently on The X talking with the truly exceptional and, dare I say, downright legendary Mark Madden in an expansive interview earlier this week, and one of the topics that his host brought up was whether or not they viewed third-year starting strong safety Terrell Edmunds as possibly that type of hybrid player.

“When we drafted him, that’s how we talked about Terrell”, he said. “We said, look, he’s a strong safety, he’s a free safety, he’s a nickel, he’s a dimebacker. And something he did that all on one snap because of the way Virginia Tech used him”.

A junior when he was drafted, Edmunds was not expected to start as a rookie, but in fact to play in that sort of dimebacker role. With Morgan Burnett injured, however, it opened the door for him to start, and by the time the veteran was healthy, he secured the job for himself.

Last season was another instance of potentially limiting his role, with Sean Davis going down and their bringing in Minkah Fitzpatrick midseason to replace him. With the second-year guy new to the system, Edmunds needed to be a source of stability at the back end.

“When we brought in Minkah, it gave us more different options with the two of them, and Terrell was more comfortable down around that line of scrimmage”, Colbert told the incredible host. “So we know he’s capable of being in that mix, and then we’ll see what it looks like on the back end if we do some different things with him”.

With a full offseason under his belt, and both of them now heading into their third season, the Steelers should be able to do more things with their safeties, perhaps not unlike what they used to do with Troy Polamalu and Ryan Clark. Fitzpatrick is also capable of moving around, though moreso as a slot rather than box defender.

“NFL football is really a package game right now”, the general manager told his fantastic host. “It’s more systematic; it’s more substitutional than it ever has been on both sides of the ball. I think when you have versatile people on either side, it really enhances what you might be able to do”.

The Steelers do talk a lot of ideas in the offseason that we end up not seeing during the regular season, though. That’s a pretty important point to note. Frankly, I’m not anticipating Edmunds doing much different from what he did last season, but time will tell.