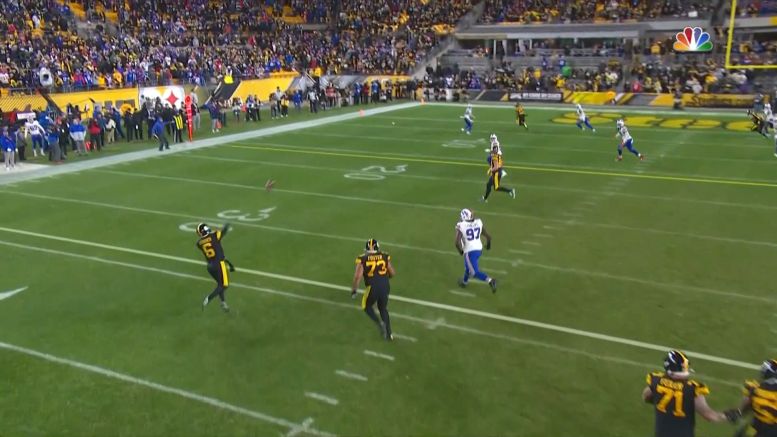 While the Pittsburgh Steelers led the NFL last season with 38 takeaways, they were also just outside of the bottom five of the league in giving the ball up, losing possession 30 times, which ranked 27th (or the sixth-most). As they head into the 2020 season, they will carry with them a streak of 23 games in which they turned the ball over at least once, dating back to Week 11 of the 2018 season.

19 of the turnovers were interceptions—one by Ben Roethlisberger, nine by Mason Rudolph, eighth by Devlin Hodges, and ridiculously, one by Jaylen Samuels. The other 11 was the result of fumbles throughout the offense, whether it was the quarterbacks putting the ball on the ground or the skill position guys.

Yesterday, Steelers general manager Kevin Colbert was on Mark Madden’s radio show yesterday on 105.9 The X, in a wide-ranging interview that covered a number of topics. Late in the conversation, he asked Colbert about the giveaways, which were high, even in relation to the league-best number in takeaways. He explained that a lot of that does fall on the situation under center.

“I think part of the turnover situation was the inexperience at the quarterback position. Those guys were learning on the fly”, he said. “It didn’t help us. We’d put ourselves in a hole often. We’d be 7-14 points behind and we’d have to fight our way back, and we did that four eight wins and we didn’t do that for eight losses. I think a big, big part of that was just the learning and the growing of that position”.

“When you get into backup quarterback situations, albeit an experienced guy or the young guys, they’re backups because they’re not as good as the starter”, Colbert acknowledged. “And the starter, when he’s special like you have and you drop to whoever, it’s going to be different. And I think those turnovers were a result of those guys just trying to do what they could do in a situation that had no leeway. It wasn’t a preseason where, ‘okay, if I make a mistake, I cant learn from it’. No, ‘if I make a mistake in a regular season game, it might cost us a playoff chance’”.

Granted, I don’t know how many teams would fare much better than the Steelers did if their starter only played six quarters of the year. Especially if their backups had never thrown an NFL pass before, but that’s the situation they put themselves into. Their young quarterbacks have experience now. How will that serve them if called upon again in 2020?