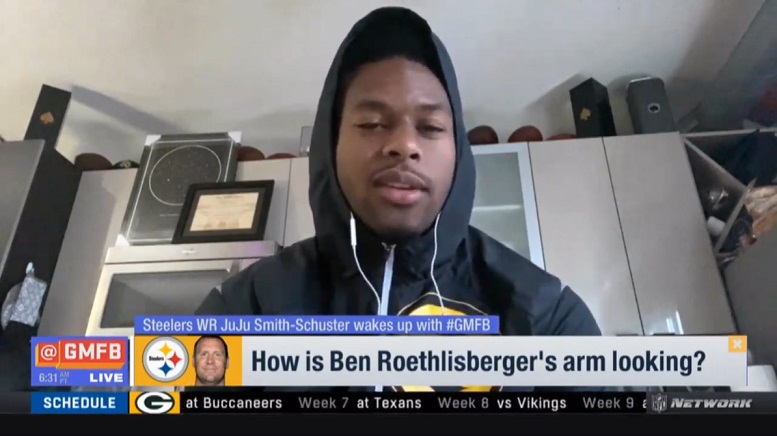 Pittsburgh Steelers wide receiver JuJu Smith-Schuster was one of three offensive players that was shown working out recently with quarterback Ben Roethlisberger in a video released on Monday and that wasn’t overly surprising. During that short video, however, Smith-Schuster looked at the camera and said, ‘He’s back,’ in reference to Roethlisberger being fully rehabbed from the elbow injury he suffered early last season. On Friday, Smith-Schuster was a guest on Good Morning Football and during his interview he was asked to talk about where Roethlisberger and what version of him people can expect to see in 2020.

“You’re getting the version that we all expect that he would be at,” Smith-Schuster said. “He’s back. He’s doing what he’s doing. He’s throwing NFL passes. There’s nothing more to that.’

Running back James Conner and wide receiver Ryan Switzer are the two other players that were in that recently released video of Roethlisberger throwing at a local high school and all three have now given their personal accounts on how the Steelers quarterback has looked and they have all been positive.

“I’m excited,” Smith-Schuster said Friday morning. “James Conner’s excited. Ryan Switzer’s excited. We’re doing things that we’re supposed to be doing and with their great defense we had last year and this upcoming season, I can’t wait to play with him.”

Smith-Schuster had a very down third season in the NFL in 2019 as not only was he part of an offense that didn’t have Roethlisberger at quarterback for most of the schedule, he also missed several games with a concussion and knee injury. With Roethlisberger back and Smith-Schuster back fully healthy, the wide receiver was asked on Friday if there’s one specific thing that he’s been working on that will hopefully lead to him having his best season ever in 2020.

Smith-Schuster will hopefully return to his 2018 form in 2020. The timing of such a return to form will help him immensely as well as he’s currently slated to be an unrestricted free agent in 2021. In short, a return to his 2018 form in 2020, which means roughly 100 receptions for more than 1,300 yards could result in him becoming one of the top 10 highest paid wide receivers in the NFL next March. Smith-Schuster believes Roethlisberger’s return from injury will help him get back to being the player he was in 2018 in addition to the quarterback leading the team back to the playoffs once again.

“Our missing piece was Ben,” Smith-Schuster said. “I think coming up this year, it’s going to be a great year for us. … Just wait. Honestly, I just gotta say just wait and let our pads do the talking.”