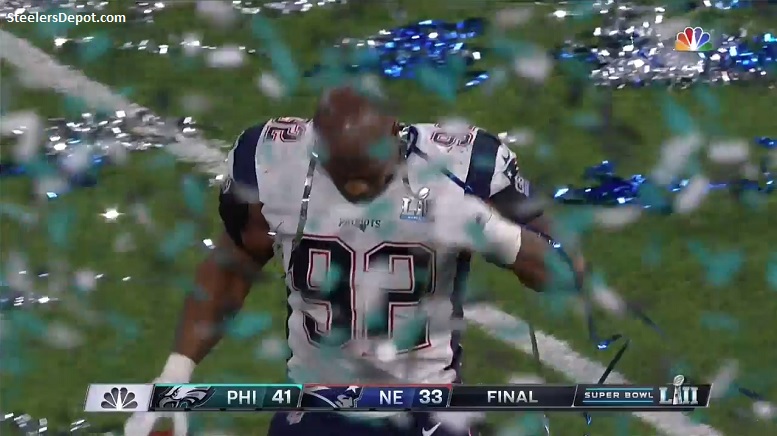 I think it’s fair to say that, at least based on yesterday’s comments, former Pittsburgh Steelers linebacker James Harrison’s reputation was tarnished in the eyes of many fans of the team based on the way that he handled himself during his final season in the league in 2017.

He himself admitted yesterday that he did whatever he could to try to get himself released because the team was not dressing him, and he even said that when he was not going to dress, he was not going to show up for games. He admitted to faking injuries to not practice while squatting 500 pounds in the weight room. He stopped short of admitting that he fell asleep in meetings, but he began to say it, and it was previously reported that he had done so.

For many fans, things got even worse when he chose to sign with the New England Patriots after he was eventually released. He would go on to play for them that season, even participating on special teams, and played in the Super Bowl, though they lost.

But from the sounds of it, he wanted that ring as bad as any other he’s ever contended for. This was during his appearance on the Going Deep podcast, which is co-hosted by his former teammate, Willie Colon.

“Like I said, everything happens for a reason”, he said about that Super Bowl”, because if you look at it, it would’ve given them six, and then the other one would’ve given them seven”. The Steelers at that time were alone with six Super Bowl trophies. The Patriots would have tied them if they won that game with Harrison, but they would win six in 2018. Had they won both, they would now have seven.

“And to be honest with you, if I had got that one, I would have came back for another one, and it would’ve been out of spite”, Harrison went on to say. After the Super Bowl loss, he chose to retire for good, but he is saying that, had he given the Patriots their record-tying sixth Super Bowl, he would have kept playing to try to get them to seven.

“It would have been out of spite”, he reiterated.

Under Bill Belichick and Tom Brady, the Patriots went from zero Super Bowl wins to six over the span of two decades. It is undeniably the most successful run in NFL history, but many now believe it has come to an end with Brady having moved on and signed with the Tampa Bay Buccaneers.

Meanwhile, in the two seasons since Harrison retired, the Steelers have gone 9-6-1 and 8-8, missing the postseason as the seventh season in both years. They did post a 13-3 record during that 2017 season and earned the number two seed, with Harrison only contributing meaningfully in one game, but they went on to lose to the Jacksonville Jaguars in the Divisional Round.

That was the year of the Jesse James non-touchdown. That win would have given the Steelers the number one seed, and they wouldn’t have had to play the Jaguars unless they beat the Patriots first.