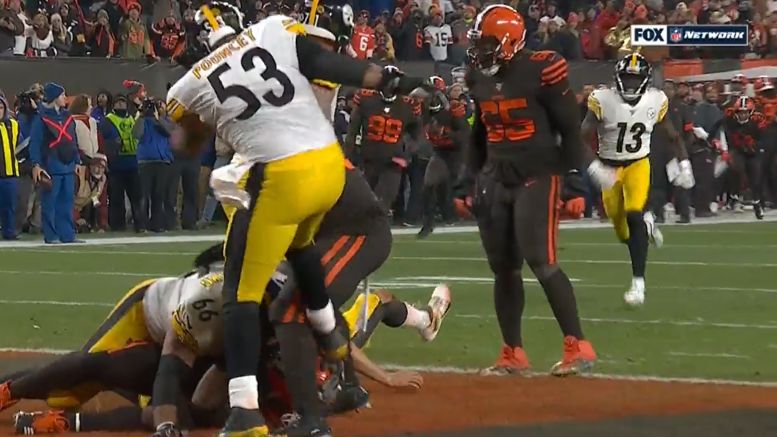 Is Myles Garrett looking for revenge against the Pittsburgh Steelers, after the fourth-year veteran defensive end was handed an indefinite suspension stemming from the incident at the end of the first game between the team and the Cleveland Browns, in which he removed Mason Rudolph’s helmet and then, a short time later, struck him over the head with it?

That is what Dan Hanzus’ recent article at NFL.com implies. He listed five ‘Player-On-Team Revenge Games’, with four listed as Player vs Team, and one listed as Team vs Player, the implication being that the party on the left is the aggrieved party. Other examples include Melvin Gordon vs the Los Angeles Chargers and Odell Beckham, Jr. vs the New York Giants. He writes:

It was perhaps the most memorable — and unquestionably the ugliest — moment of the 2019 season: Late in an important Thursday night game between the Browns and Steelers in Cleveland, Myles Garrett ripped the helmet off Mason Rudolph and struck the Pittsburgh quarterback in the head with it. Garrett was ejected from the game and subsequently suspended indefinitely. Things took an uglier turn when Garrett accused Rudolph of using a racial slur during the altercation, an allegation Rudolph vehemently denied and the league found no evidence to support. A healthy Ben Roethlisberger means Rudolph is unlikely to be on the field when these two teams meet again in October, but Garrett, who was reinstated in February, will surely be the center of attention for this game.

If anybody should be seeking revenge, the Steelers should probably be doing so. It was their player who was assaulted, for unfounded reasons. It was the league’s decision to hand him a suspension, even though it was inevitable. It certainly wasn’t Rudolph’s decision to be hit over the head.

So why wasn’t it framed as Steelers vs Myles Garrett, the way Hanzus suggests the Chargers have taken umbrage with Tom Brady because he didn’t reciprocate their interest in joining forces this offseason, instead signing with the Tampa Bay Buccaneers.

One can only hope that this is a matter of a writer shoehorning something into a general concept that doesn’t totally fit rather than somebody actually suggesting that Garrett has any type of justifiable ‘revenge’ to pursue against the Steelers.

The Browns went 2-4 in the six games Garrett missed, going from 4-6 to 6-10 by the end of the season, with their only wins coming against the Miami Dolphins and the Cincinnati Bengals, both of whom just drafted in the top five. They also lost to the Bengals in the season finale—and to the Steelers, two weeks after the first game, sans Garrett.