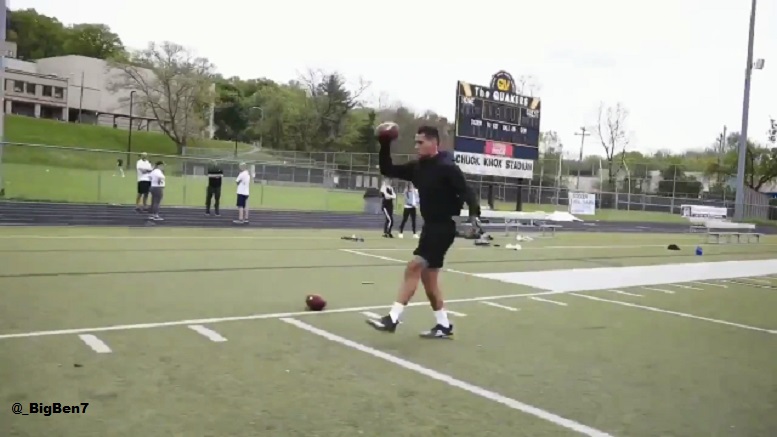 Pittsburgh Steelers quarterback Ben Roethlisberger posted a video on Monday of him getting his beard trimmed up and that was a celebration of him throwing his first NFL quality pass since his 2019 elbow surgery. That same video showed Roethlisberger getting some passing work in recently with wide receivers JuJu Smith-Schuster, Ryan Switzer and running back James Conner at Quaker Valley High and prior to him getting his beard trimmed. After that video was posted on Monday, Conner was a guest on The Adam Schefter Podcast and he was asked during his interview if he’s been working out with Roethlisberger.

“Yes, I’ve been at his place and have been throwing it around,” Conner told Schefter. “He’s looking good, man. He got a haircut, too. So, he’s looking good throwing the ball and he’s styling now, too. So, this has been fun, man. It’s been awesome this year. I think we’ve really grown as teammates and friends. All of us, some receivers that’s been throwing with us, JuJu and Switz, and just being around them is motivating, it’s encouraging.”

Schefter then asked Conner if he has any doubts in his mind about Roethlisberger possibly being ready for the start of the 2020 regular season now that he’s worked out with him a few times this offseason.

“Yeah, I don’t have no doubt, personally,” Conner said. “I know his work ethic and I just know his mindset and what he’s capable of and what he wants to do and that’s what we all want to do, and that’s win it all and just take it one game at a time. And so, he’s looking healthy, man. He’s fired up. He’s anxious to play. Can’t wait to get out there with him and I’m going to play my heart out for him and the rest of the teammates.”

So, what did Conner think about Roethlisberger’s beard during that long span of time that he grew it out?

“That’s a Pittsburgh thing,” Conner said. [Brett] Keisel had the beard, so I guess that’s just part of Pittsburgh and that’s just how they do it. But it was wild. He was growing it out, like he said, until he made that NFL pass and he did that. And so, I think it was cool for him to have something to look forward to during this time. And so, he’s looking good. The beard looks good, too.”

Conner said that he had previously been down in Florida training this offseason and that he is now back in Pittsburgh. In short, he’ll probably be busy at times in the next few months getting some work in with Roethlisberger and several other of his offensive teammates.

“Ben, he’s looking great,” Conner said Monday. “We’ve got a couple of good workouts in so we’re just going to keep building on it.”