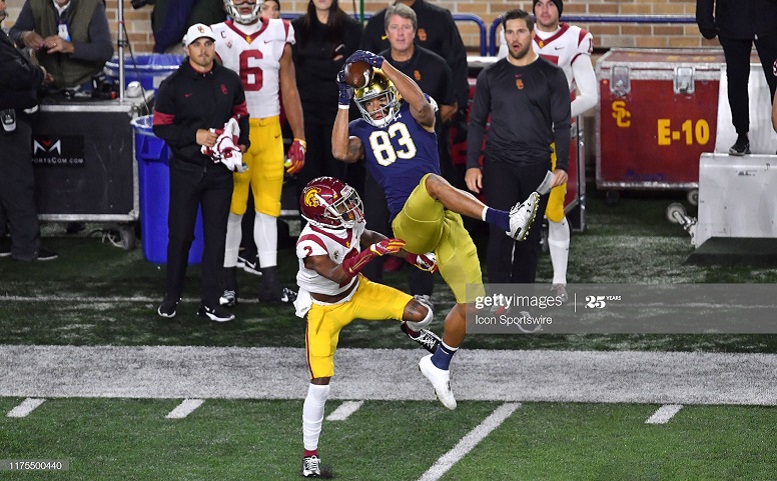 This series continues on with a complete contextualization of Claypool’s 2019 Notre Dame game against USC.

In total, Claypool was targeted five times against USC with all but one of those coming in the first half. He caught three of those targets for 47 yards with his longest reception being 26 yards, a great leaping catch on a back-shoulder throw down the right side of the field early in the game. Both of Claypool’s other two catches were also great grabs with one of those being a very off-target throw. Claypool came close to have two more receptions against USC. One vry low throw he did manage to catch but was out of bounds once he finally had control of it. The other incompleted target came on a deep post route that required the USC cornerback to make a great play in-phase without the help of a middle-of-the-field safety. Claypool’s average targeted distance against USC was 18 yards down the field and his average reception length was 12.3 yards. After injuring his left ankle a few games prior against Virginia, Claypool looked very healthy against USC. Make sure to watch each of his targets against USC because he showed quite a bit on all of them.

Back healthy again, Claypool had several blocking opportunities against USC and those included various degrees of effort and outcomes as you’ll see in the video below. While Claypool certainly has the body and the want to for blocking out in space, sometimes his overall effort is quite good enough and especially against cornerbacks that he should mostly dominate. One of Claypools incomplete blocking efforts came midway through the fourth quarter and it likely cost Notre Dame’s offense a long rushing touchdown in the process. On that particular play, Claypool came off of his block on a USC safety way too soon and the defensive player made what appeared to be a touchdown-saving tackle. Once again, Claypool, looked much healthier in this game against USC after dealing with an ankle injury the previous two weeks so his blocking should have been up to par.

Claypool’s sixth game of the 2019 season included the wide receiver showing how much of a complete player he can be. While Claypool only registered three catches for 47 yards against USC, he was very close to having two more and possibly even a touchdown. His ability to make acrobatic catches of poorly placed footballs outside of his large frame was on full display against USC as was his ability to get down the field quickly on post routes. While Claypool’s blocking against USC could have been much better, at least the overall want to is there. He should be able to become even better at that phase of his game at the NFL level and especially if he stays on his block attempts longer. His overall blocking performance against USC was what prevented him from having a nearer perfect game as his special teams play was quite great and fun to watch.