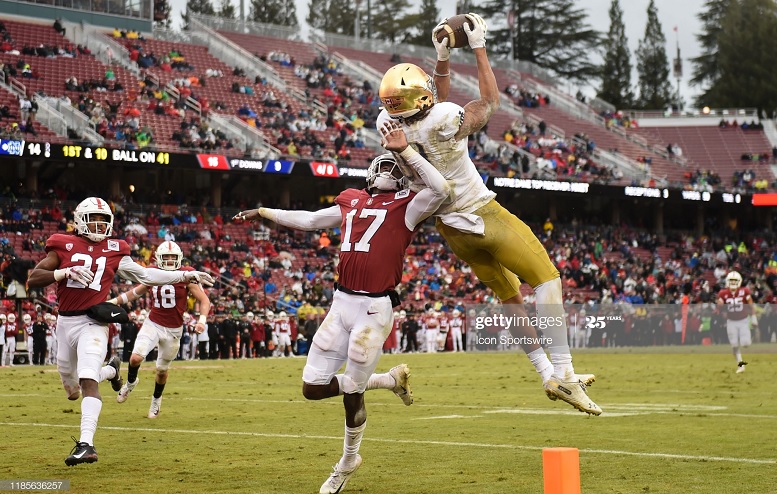 This series continues on with a complete contextualization of Claypool’s 2019 Notre Dame game against Stanford.

Claypool only caught three passes for 63 yards against Stanford but two of those were good for touchdowns. His first of two scores was a signature deep contested catch by him down the left sideline. He easily out-leaped a back-turned defender in coverage for the football at the one-yard line and his momentum carried him into the end zone for the score. Claypool’s second touchdown of the game came via an underneath crossing route that included the Stanford defense busting the coverage. Nobody on the Stanford defense was within 10 yards of Claypool when he caught the football on the move at the 5-yard-line and he easily made it to the end zone for the score from there. Claypool also drew a pass interference penalty good for 15 yards early in the third quarter. The footing on the field wasn’t great for Notre Dame’s game against Stanford and that resulted in Claypool slipping a few times at the top of his routes. This resulted in him not having at least one more completion.

There were several blocking attempts by Claypool against Stanford that I could choose from and several are included below. Due to his size, Claypool can fully dominate most linebackers and defensive backs away from the football when he sets his mind to doing so. Sometimes he still comes off blocks a bit earlier than you would probably like to see and that has been the case throughout his 2019 tape. The Steelers will attempt to cure him of that once they get him on the field.

Claypool was on the Notre Dame punt coverage team against Stanford but nothing really stood out with that phase of his game that we already haven’t seen before. Below, however, is a clip of him gunning from the left side as opposed to his usual right side. He always seems to get down the field with ease as a gunner throughout his 2019 tape.

Claypool’s twelfth game of the 2019 season included just a few catches but one big one down the left sideline that put Notre Dame ahead for good. It was a signature Claypool catch and one I’ve come to expect while going game-by-game through his 2019 tape. Claypool’s second touchdown wasn’t as equally impressive outside of him not dropping the football on the underneath crossing route for the easy score like he did the weekend before against Boston College. One would not think it;’s hard to lose such a big player such as Claypool in space underneath, but that very thing happened quite a bit throughout the 2019 season. As for Claypool’s blocking and special teams play against Stanford, we really didn’t learn anything new in those two phases and that’s not a bad thing. If not for Claypool slipping on a few of his routes against Stanford, he likely would have had a few more receptions. Additionally, he didn’t see much playing time in the fourth quarter against Stanford once Notre Dame got ahead comfortably later in the period. His 2019 season included him resting quite a bit on the sidelines in the fourth quarter due to Notre Dame blowing out a few teams.