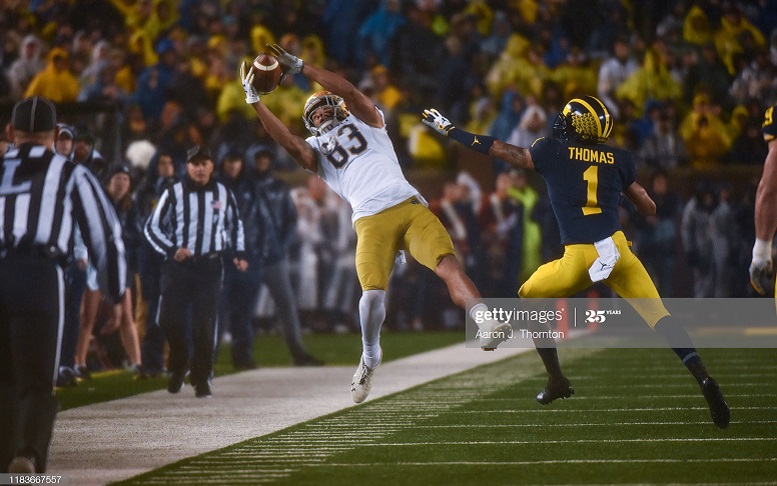 This series continues on with a complete contextualization of Claypool’s 2019 Notre Dame game against Michigan.

In total, Claypool was targeted ten times against Michigan and he officially caught two passes for 42 yards. Both catches, by the way, were phenomenal and of the back-shoulder variety. One came via a slot fade early in the game. Claypool also had another phenomenal catch in the second quarter that was wiped out by offsetting penalties. That catch, while it did not count, is included in the target totals as well as the video compilation. While Claypool did have two great catches that counted against Michigan, he unfortunately registered four drops and three of them came in the first half. One came on a fluttering pass attempt in the rain, but Claypool still should have made that grab. The one drop in the second was a pass that while a little high, still went right through his hands. All four perceived drops are in the video below and you can see if I am being too harsh on categorizing them all as such. A few targets that went to Claypool against Michigan were very poor throws that he had no chance at catching. His average target distance against Michigan was almost 18 yards down the field.

Claypool had a few blocking assignments against Michigan that were worth highlighting. The biggest thing with him in that phase of his game is just getting him to stay on his blocks and finish them. He has the will and the want to block, he just needs to be more consistent when it comes to finishing. He’ll be dominant if he does become a finisher at the NFL level. He is a big kid and hard to get around in open space.

Against Michigan, Claypool once again showed why he should be a special teams asset for the Steelers during his rookie season. He once again functioned great as a gunner against Michigan and was even in on one tackle on the several punts throughout the contest. He also showed that he will give chase on punt coverage when the returner is running away from his side.