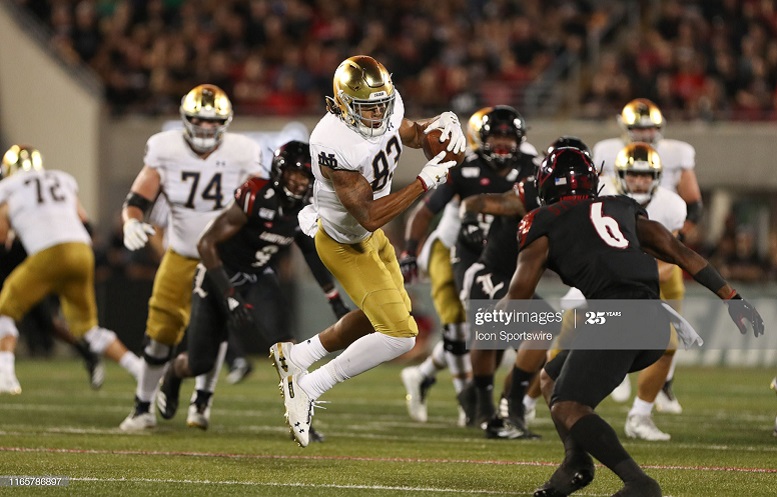 This series now starts with a complete contextualization of Claypool’s 2019 Notre Dame game against Louisville.

In total Claypool was targeted nine times against Louisville and he caught five of those passes for 94 yards. 55 of those receiving yards came after the catch. Of the four passes that Claypool did not catch, all of them were off target and uncatchable. Two were throwaways by the quarterback in the fourth quarter and two others were high throws in the first half. On Claypool’s first catch of the game, a 16-yard reception in the second quarter, he exhibited great body control along with a nice catch radius. That throw was behind him and he still managed to pluck it out of the air and turn to get four more yards. Claypool’s two explosive play receptions against Louisville showed how well he runs in open grass after the catch. He almost scored on the last of the two. Claypool’s average reception distance against Louisville was 7.6 yards and two of his receptions came in the middle of the field between the hash marks.

Claypool had three very nice block attempts against Louisville and you can see those below. One happened after a completed crossing pass while two more happened on runs to his side of the field. Really nice effort and effectiveness on all of these.

Claypool played quire extensively on the Notre Dame punt coverage team against Louisville and he wasn’t hard to pick out on tape. Below is just one example of him winning as a gunner on the outside and getting down field and in position to make a tackle if needed. Claypool was not credited with any special teams tackles against Louisville, but he was in position to make a few had punts not been fair caught.

Claypool’s first game of 2019 against Louisville was not disappointing at all. His five catches for 94 yards included quite a bit of yardage gained after making receptions in addition to him making one tough catch on a throw that was behind him. His catch percentage was down due to the play of the quarterback. He should have had at least one more reception against Louisville and that would have likely put him over 100 yards receiving for the game. Claypool’s blocking and special team efforts were also more than above-the-line against Louisville.