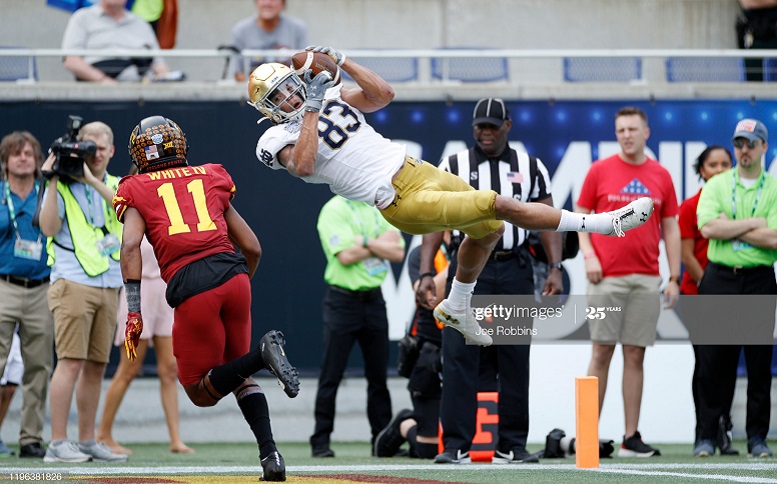 This series now comes to a close with a complete contextualization of Claypool’s 2019 Notre Dame game against Iowa State.

Claypool closed out is college career at Notre Dame with a fine showing against Iowa State in the team’s bowl game. He caught seven passes in that contest for 146 yards and a touchdown. He was half a yard short of another touchdown in that bowl game as well but not for a lack of effort. Claypool’s seven catches came consecutively on targets after being overthrown on his two early targets. His touchdown came on the right side after beating a defensive back off the line quite handily after the defender lost his footing. The reception by Claypool in the end zone was made on a high-ish cover-2 hole-shot throw. while he was wide open on that play, it wasn’t an easy catch for him to make. Claypool registered quite a few yards after the catch against Iowa State and closed out his college career with a short catch on the right side via a tunnel screen that included him bulling over defenders for a gain of 21 yards on a 3rd and 11 play. He what us great effort on what will go down as his final reception at Notre Dame.

To close out Claypool’s college career at Notre Dame, he really wasn’t asked to do too much in the blocking department in the team’s bowl game against Iowa State. Because of that, there’s no clips that hold much substance to pass along. We’ve seen enough of Claypool’s blocking throughout this full season contextualization series to know what he is and isn’t as a blocker. In short, he’s a more than capable and willing blocker who just needs to make sure he does a better job at finishing at the NFL level with the Steelers. He’s an imposing force on the outside as a blocker when he really wants to be.

Claypool was on the Notre Dame punt coverage team against Iowa State per usual and there are two plays from that contest worth clipping. The first one, Claypool gets down field and in position to make the tackle on the punt returner only to miss it. However, Claypool stayed with the play and after the next teammate managed to rip the football loose from the punt returner, the wide receiver was there to pounce on it for the fumble recovery. The second included clip shows Claypool making it down the field quickly to give himself a chance to down the football deep in Iowa State territory. An unlucky bounce of the football, however, made Claypool’s effort moot and it resulted in a touchback. Claypool gave maximum effort as a gunner for Notre Dame throughout the 2019 season and it will be surprising if the Steelers don’t use him in that role throughout his rookie season.

Claypool closed out his college career at Notre Dame with a very productive game and tons of effort. He certainly won’t be accused of mailing in this bowl game. We saw a little bit of everything from Claypool against Iowa State. There was a deep ball reception that required great body control off of a clean win for separation off the line. We saw a nice corner route off of an inside stem and another deep reception that he almost scored on after the catch with a very nice effort. Claypool racked up some impressive yards after the catch against Iowa State with one of those plays being a 3rd and long that required maximum effort to break tackles. Claypool also showed up on special teams to close out his college career with a fumble recovery on a punt return. His effort against Iowa State resulted in him being was named the Camping World Bowl MVP, a nice way to end his college career at Notre Dame.