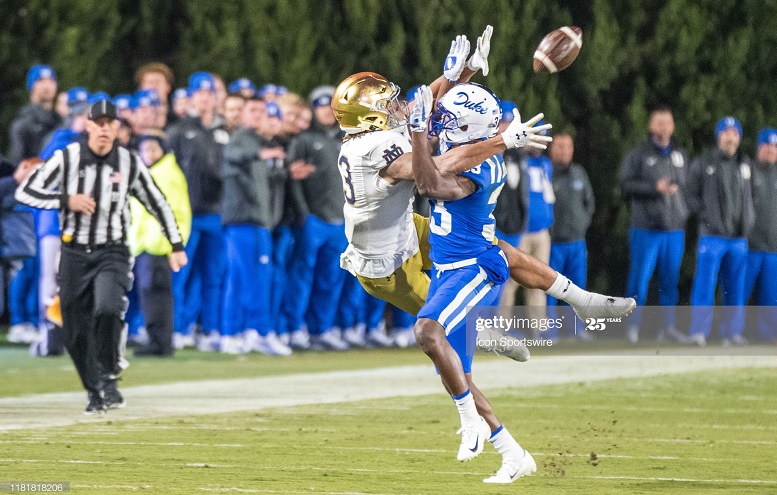 This series continues on with a complete contextualization of Claypool’s 2019 Notre Dame game against Duke.

Claypool not only registered five receptions against Duke for 97 yards and a touchdown, he also drew two pass interference penalties on two other targets that netted 18 extra yards. In total, Claypool was targets nine times against two with two of those being wiped out by penalties. One other target was way short of him late in the first half and ultimately intercepted by the Duke defense. Claypool did a great job getting separation on all of his five receptions against Duke. His first catch of the game, a 30-yard reception down the left side of the field, included him winning to the inside off the line and then stacking the cornerback. The football being under-thrown required Claypool to make yet another combat catch with his big frame and high reach. Claypool’s only touchdown reception of the game came in the first quarter via a quick slant inside that resulted in a large amount of separation in a short area. That separation allowed for a very uncontested catch and an easy score. His third reception was also on a quick slant inside following a clean inside release. After the catch was made, Claypool gained another 15 yards as he was tough for the duke defense to bring down. Finally, Claypool’s longest reception against Duke came in the third quarter. Once again he won to the inside off a tighter split and then bent his route back outside to the corner. He had huge separation on this route yet was still forced to make a tough catch, which he made look easy. I do not have video of Claypool’s final catch against Duke, which gained all of 2-yards.

Claypool had a few more blocking assignments against Duke and I trimmed up a few for all to see below. His second of two included clips below shows him getting just enough of the safety at the second level so that Notre Dame quarterback Ian Book could get by for a huge run.

Against Duke, Claypool once again played on the punt coverage team and while there isn’t too much to pass along from that game on the wide receiver when it comes to his special teams play, below are a few gratuitous clips of him getting down the field as a gunner.

Claypool’s ninth game of the 2019 season was another nice one for him and he definitely looked like one of the best players on the field in that contest against Duke. Claypool wore the Duke cornerbacks out most of the game and eveb drew two pass interference penalties. Claypool won in short areas and over the top against Duke in addition to showing he could gain tough yards after the catch. While not overly dominant as a blocker against Duke, Claypool did enough on one attempt against to Duke to free his quarterback for a huge gain. As usual, Claypool was an easy player to spot on the Notre Dame punt coverage team due to his ability to get off the line and down the field with relative ease.