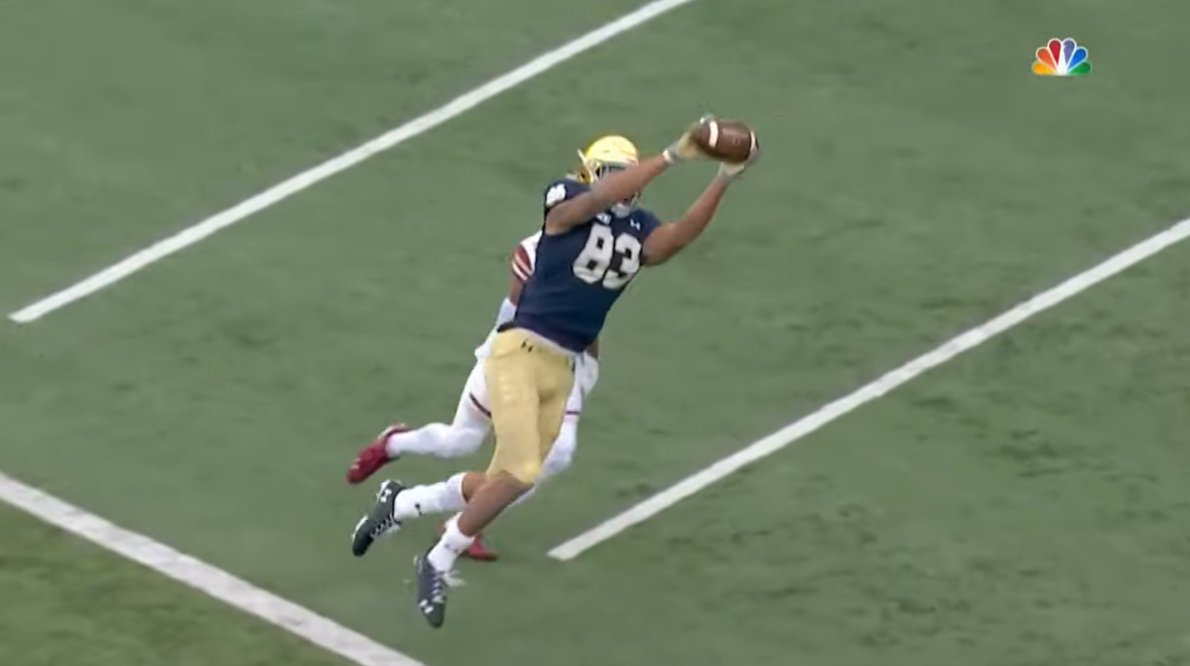 This series continues on with a complete contextualization of Claypool’s 2019 Notre Dame game against Boston College.

Claypool followed up his big game against Navy with another nice showing against Boston College, which was Notre Dame’s final home game of the 2019 season. In total, Claypool was targeted 12 times and he caught seven passes for 60 yards and a touchdown. His longest reception of that game was just 11 yards and his longest attempted target was just 19 yards down the field. Claypool’s impressive short area win for a touchdown against Boston College cornerback Brandon Sebastian was the highlight of the game for him. That catch also showed us another good look at Claypool’s huge catch radius, as you can see in the picture used for this post. Claypool also showed us his large catch radius on a sideline reception late in the first half on a low throw. A few other of Claypool’s seven catches came via quick slants or underneath crossers. His last catch of the game was also a nice one in the middle of the field with very tight coverage and a small window. He picked that pass out of the air with ease. Claypool should have had one more catch and possibly another touchdown against Boston College, however. His drop on an underneath crossing route early in the second quarter resulted in Notre Dame having to settle for a field goal. It seems like most of Claypool’s drops in 2019 have come on short underneath crossing routes. Could I have charged Claypool with another drop against Boston College? Probably, but I let him off the hook on that incompleted target because of the ball placement on the pass. Let me know if I was too lenient on that one when you watch the replay via the link above

There’s really not much to pass along on Claypool concerning his run blocking against Boston College outside of the two clips below. One of them includes him blocking out on the edge for a scrambling quarterback and that turned out be a nice gain and more importantly, prevented a hit from happening.

Claypool was on the Notre Dame punt coverage team against Boston College but there’s not much to pass along from the two punts that happened while he was still in the game. Below is gratuitous punt coverage clip that shows Claypool working from the outside to the middle of the field off the snap.

Claypool’s eleventh game of the 2019 season included a lot catches but not that many yards. It also includes him scoring one touchdown. He should have had two, however, as he dropped an easy one early in the game on a third down. The biggest takeaway from Claypool’s game against Boston College is that we got to see a little more of his overall catch radius when not having to catch a contested football or a back-shoulder throw. On Claypool’s touchdown, he catches the football high and way away from his body. His later sideline catch shows his catch radius working to the south. His short area win on the touchdown was also impressive as he gave him self quite a bit of separation right off the line. His play as a blocker and special teams participant really didn’t show us anything new or that we didn’t already know about him. It was a good game for Claypool that could have been even better had he not suffered that early drop.