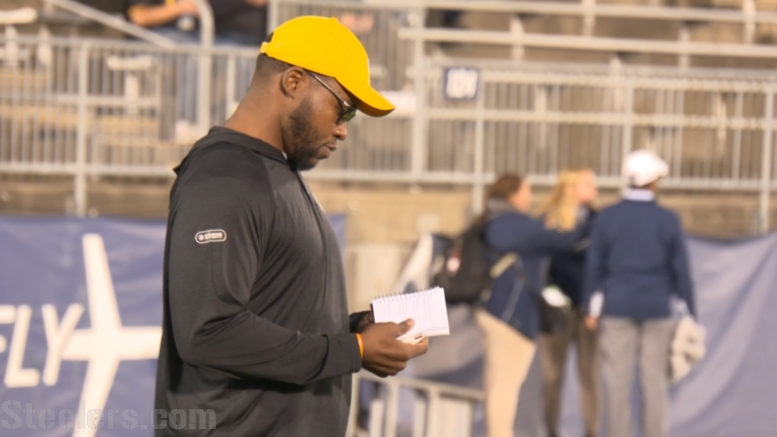 This probably isn’t exactly surprising, based on the way that things played out in the draft, but the Pittsburgh Steelers had a clear guideline when it came to evaluating prospects and setting up their board for the 2020 NFL Draft amid a pandemic that forced people to shelter in place.

With the vast majority of Pro Days cut off, travel restricted, prospects unable to be brought in for face-to-face visits, and many other obstacles foreseen and unforeseen that were thrown in the paths of the league’s franchises over the course of the past couple of months, the simple fact is that everybody was working with incomplete information.

And so they had to prioritize certain things they value over others. Pro Scouting Coordinator Brandon Hunt made it clear what that was. “What it comes down to is hearts and smarts”, he told the team’s website recently. “Does the guy love football and is he smart”.

For the most part, it’s very evident that the guys the Steelers have brought in are all players who love the game. Some of them even came back from significant injuries that caused them to contemplate their future, like sixth-round safety Antoine Brooks, whom Mike Tomlin described as an energy-bringer, admittedly one of his favorite terms.

Chase Claypool is a guy from smalltown Canada who threw his high school highlights up on social media and landed a walk-on opportunity at Notre Dame. Alex Highsmith is a small-school guy out of Charlotte who cared too much about his team to pursue a transfer opportunity, and still got drafted in the third round. Oh, and he, too, was a walk-on.

‘Hearts and smarts’ is far from a new phrase from the Steelers’ front office when discussing their draft class, and it shouldn’t be new to anybody who’s been reading this blog for a while. We talked about how it will likely be a focal point this year under the circumstances, and in hindsight, it clearly was.

The Steelers didn’t come away with the shiniest, most attention-grabbing draft class in the league. Nobody is really talking about how they got away with steals and this and that, though there are those who are high on fourth-round running back Anthony McFarland.

What they did take out of the 2020 NFL Draft is a group of six men whose character both on and off the field they feel strongly about and whom they believe will be an asset to the organization. That’s about as much as you can ask for under the circumstances. Now it’s up to them to show it was a wise approach.