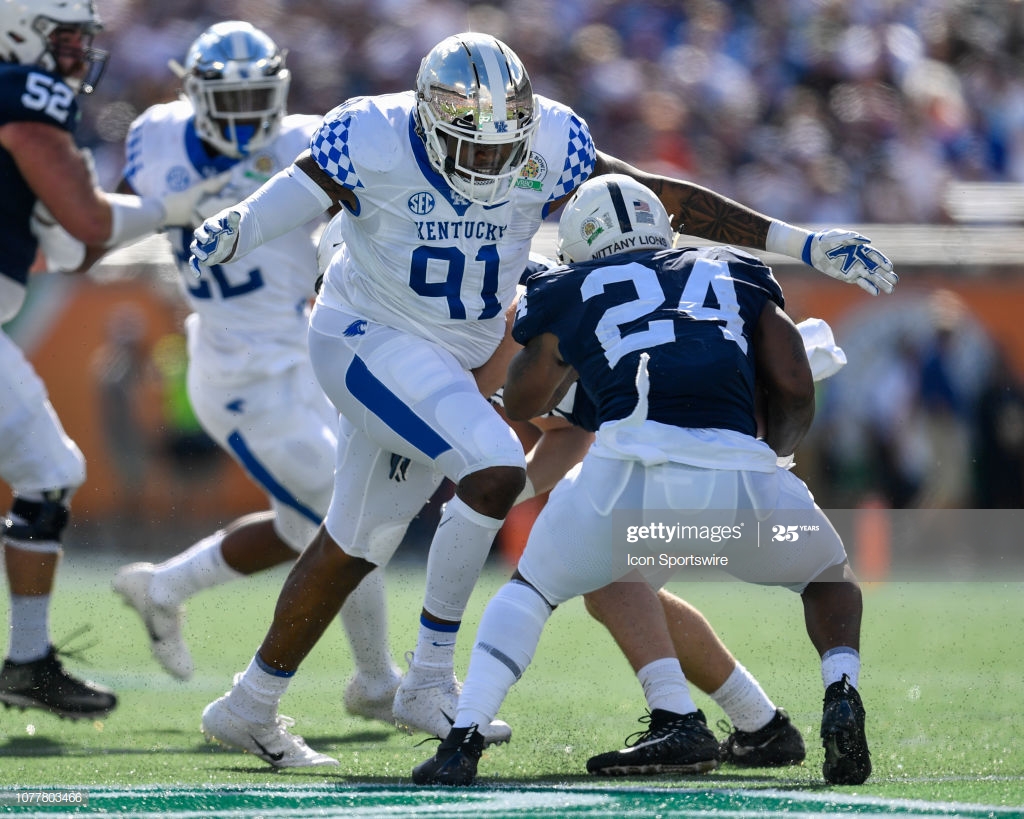 – Rare height and length, especially for the position
– Flashes power on punch with proper placement and leverage, can overwhelm undersized guards and centers and collapse the pocket
– Shows strength at point of attack and can stalemate offensive linemen in the run game
– Runs hard to the ball, chases sideline-to-sideline and doesn’t quit on plays
– Gets hands up in throwing lanes, can disrupt throws even without pressure
– Versatile and played up and down the line in a 3-4 front
– Played more snaps, rotated less than expected
– Good production, burst onto scene senior season, with impressive sack totals

– Big body but thin lower half, skinny legs/ankles
– Lumbers around, moves and runs like a baby deer in tight space and when asked to change directions
– Works hard to get off ground but easily cut and taken to the ground
– Lacks go-to pass rush move when bull fails/isn’t used, unrefined, not a great hand fighter who tires and gets stuck on blocks when initial move stalls out
– Predictably struggles with leverage, gets too tall upon contact and loses leverage/length, gets swallowed up and too tight to the blocker, making it difficult for him to shed blocks
– Slow off snap and often takes too long to engage with blocker
– Struggles to finish and misses too many tackles/chances
– Average starting experience
– Project who may need position switch for best chance to succeed in NFL

It’s hard not to have Calvin Taylor catch your eye skimming over the Steelers’ list of undrafted free agents. A 6’8, 310 pound defensive linemen with 8.5 sacks as a senior in the SEC? Ok, I gotta watch this guy.

So let’s check Taylor out. On the plus side, his size can obviously be a tremendous asset. He creates power on his bull rush and can simply collapse the pocket. Like here. He is over right guard and ends up walking back the Mississippi State center. Forces the QB to roll to his left.

I also admire his effort. He works hard for a big guy who could just the play roll past once the ball is away from him. But he works hard and will chase sideline-to-sideline, a must if you want to make it in Pittsburgh. Chases down this screen on 3rd and 6 in an attempt to prevent the first down.

He also uses that 6’8 frame well, batting down four passes as a senior. Here’s two of them. Lacks the quickness and hand use to consistently pressure the QB but can disrupt the passing game in other ways.

But the dude moves like someone who’s 6’8. He can get up to speed in a straight line but in tight quarters, like the ones he most often sees in the trenches, he’s rigid, tall, and looks out of place. He’s like Daniel McCullers but McCullers is a lot heavier and filled out. Taylor is like if Big Dan skipped leg day. Very easy to cut, like the LT does here. Taylor works hard to get up but it’s going to be easy to get him on the ground on zone runs.

His game is hot and cold too. He’s slow and late out of his stance, hurting him as a pass rusher. Takes a long time to get going and initiate contact. Watch him as the RDE here. Last man to move his feet.

While his length should be an advantage, he predictably struggles with leverage. That gets him tall and uprighted, failing to create space between him and his blocker and he has a hard time shedding blocks when his pad level rises. You can see that in the second clip too where he flows down the line but can’t get off the block. Just gets carried along.

On the plus side, he did play in their 3-4 defense and moved up and down the line. Most often, he played as a 4i tech, inside shade of the offensive tackle, so he has experience in the same front Pittsburgh employs.

While his production is impressive, his sacks aren’t as eye-popping as the numbers indicate. And there are serious movement/leverage issues if he were to stick along the defensive line. The team did announce him as a defensive end when they signed him but I’d probably take him as a project as an offensive tackle. Just as they did with Alejandro Villanueva, though for every success story like his, you have guys like Brian Mihalik who don’t stick. Taylor played left tackle in high school and I’d try him there again, especially knowing Pittsburgh has three tackles set to hit free agency next year (Villanueva, Feiler, Banner).