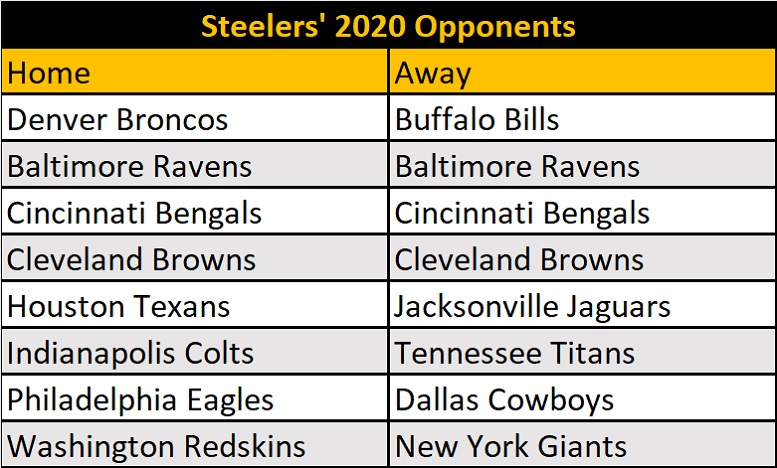 The NFL will release the full 2020 regular season schedule later this evening and already a few reported leaks are beginning to surface regarding games that indirectly affect the Pittsburgh Steelers and their order of opponents.

First, it seems that the John Clayton Wednesday expectation in which the AFC would play the NFC for the first four weeks is getting blown right out of the water early Thursday morning. Several reported schedule leaks on Twitter show a few teams opening up with divisional games. One of those “reported” leaks has the the Washington Redskins opening at home against the Philadelphia Eagles. If true, you can cross off both of those teams as being the Steelers Week 1 opponent.

Redskins will open the season at home against the Eagles, per source. NFC East battle right out of the gate in Week 1.

There’s also already a Thursday afternoon report that states that the New York Jets will open on the road against the Buffalo Bills. If true, you can rule out the Bills as being the Steelers Week 1 opponent.

It’s really starting to sound like the Steelers might ultimately open their 2020 regular season with a divisional game and possibly even against the Cleveland Browns.

It’s going to be a long day with the official NFL schedule not being released until 7:30 p.m. EST at the earliest so make sure to check back here throughout the day as this post will be updated with the various supposed schedule leaks that affect the Steelers.

UPDATE: A few are disputing this supposed leaked Jaguars schedule that has them playing the Steelers in Week 11.

UPDATE: A 2020 Steelers preseason game has now surfaced and this one is against the Saints in Pittsburgh.

Saints also have a preseason prime-time game at the Pittsburgh Steelers on FOX, Week 2, Aug. 23.

UPDATE: It’s now really looking like the Steelers will open their 2020 season against an AFC North team.

Broncos opening at home vs Titans in Monday nightcap, (last game of week 1) per sources. #9sports