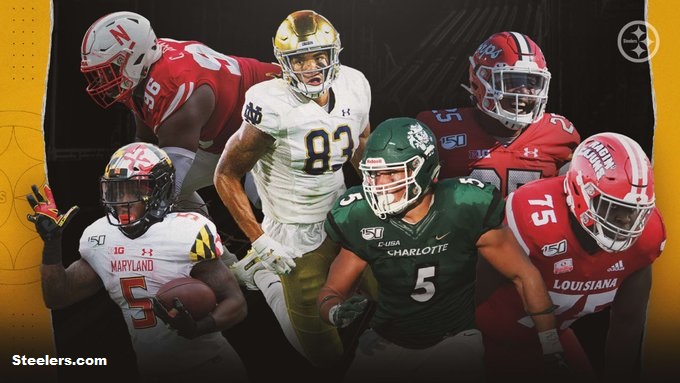 Now that the 2020 NFL Draft is complete, it’s time to take a closer look at all of the players.  I’ll leave the film room analysis to the experts on this site.  But I did get a few questions on Twitter about prior injuries regarding a couple of the new Pittsburgh Steelers rookies, so let’s take a look at the injury history of each draft pick.

Other than a couple of ankle sprains, the Notre Dame wide receiver really only has one significant injury in the past.  During his sophomore year he injured his right shoulder against Navy on November 18, 2017.  He was able to stay in the game and played the following week in the season finale.  During a one-on-one drill at a practice prior to the Citrus Bowl, he unfortunately landed badly on his right shoulder, exacerbating the injury.  He underwent surgery to repair his AC joint and missed the bowl game.  He got a late start on offseason workouts heading into his junior year as he recovered from the injury (and his coach evaluated other wide receivers on the roster) but he did play in every game that season.  His senior year he again played all of the regular season games as well as a bowl game catching 66 passes for 1037 yards and 13 TDs.  Clearly, his prior shoulder injury has not been a factor following his recovery.

In a study published in the American Journal of Sports Medicine in 2013, data taken from the NFL injury Surveillance System over 12 seasons from 2000-2011 was evaluated.  2486 shoulder injuries were identified with 727 (29.2%) of these injuries involving the AC joint.  These injuries occurred most frequently in quarterbacks, defensive backs, wide receivers, and special teams players.  Surprisingly, only 1.7% of these required surgical management.  Unfortunately the authors did not provide data about whether any of these were recurrent injuries or the risk of recurrent injury.

A group of orthopedic surgeons in Florida and Alabama reviewed 60 NFL players who had undergone shoulder stabilization at their institutions (for all types of shoulder injuries) to evaluate the rate of return to play.  You may recognize Dr. James Andrews as one of the surgeon authors.  They found that 90% of NFL players were able to return to game play following shoulder stabilization surgery.  The average return to play time was 8.6 months.

Orthopedic surgeons at the Henry Ford Hospital in Detroit, Michigan identified and evaluated 83 NFL players who sustained an in-season shoulder instability event.  For players who were able to return to play, those who underwent surgical repair (31%) had a lower recurrence rate (26% versus 55%) and a longer interval between a recurrent instability event after return to play (14.7 versus 2.5 weeks).  These surgeons concluded that surgical stabilization of the shoulder after an instability event decreases the chances of a second instability event and affords a player a greater interval between the initial injury and a recurrent event.  Again, this included all types of shoulder injuries.

Bottom line: Claypool has had an excellent recovery from his shoulder surgery in 2017 with no setbacks so this shouldn’t be an issue in the future.

The walk-on at UNC Charlotte who earned a full scholarship comes to Pittsburgh with an essentially clean health history.  His only injury occurred in the off-season following his redshirt freshman year.  He had put on 30 pounds since the start of the season, mostly with a diet of pizza.  While running sprints to train, he suffered a hamstring strain.  Over the next year, he focused on nutrition, even cooking his own meals, and prioritizing his health.  As reported by Andrew DiCecco, Highsmith described his turning point: “We never had a grill in the first couple years at our house, which I hated,” Highsmith said. “We finally got one in the summer of 2018, and that’s what really changed the game. I’d be up there grilling at least 5-6 times a week that summer. That really helped me a lot, learning how to grill.”

Bottom line: Highsmith has incorporated nutrition and fitness into his routine, so he has no increased risk for soft tissue injuries.

It’s rare for any running back to arrive at draft day without any injuries in the past and the Maryland player is no exception.  A rising star in high school, the running back missed his senior season after suffering a fibula fracture which required surgery, including a tendon repair.  Although he returned to training the following spring, he sat out his first year of eligibility as a redshirt.  What’s a bit odd is that his coaches didn’t announce that decision until the season was already underway, so it isn’t clear if McFarland’s recovery and rehab were progressing as slowly as suggested or if a crowded backfield was a factor as well.  Both the head coach and the offensive coordinator suggested that he needed to physically rebuild, with the OC saying that they had a year to “really develop his mind and start to work on getting his body back to where it was from a physical standpoint”.  Given that he was reportedly grinding every day in practice, the coaches may have just wanted to save a year of playing opportunity while they had 2 starting backs who had combined for 1600 yards rushing the prior year.

There is no detailed information available on the surgery done for his fractured fibula, but based on the scar seen in this photo from the Combine, it would appear that this was a distal fibula fracture that was repaired with a lateral approach.  That also suggests that whatever tendon was repaired wasn’t the Achilles.  And since there was never any mention of ligament injury in any of the articles I found, the ankle joint itself was not involved.  In reviewing the NFL database from 2000-2014, 237 distal fibula fractures were identified and 197 of them were isolated distal fibula fractures.  54% of them required surgery.

After a successful first season, the RB struggled with a high ankle sprain in his second year playing.  As is often the case, no clarification is made anywhere in any tweet, article, or injury report which ankle was sprained.  Believe me, I looked for longer than I care to admit.  It will never cease to amaze me that no one mentions which side the injury is on, even in the NFL.  And I don’t see any extra tape on either ankle in any of his 2019 game film, so it remains a mystery.  But I also didn’t find any mention from the reporters that cover the Terps of a walking boot (which they did mention with regard to his QB during this time period), so it sounds he was never on crutches or in a boot or a brace, making it more of a nagging injury than a severe one.

Bottom line: The fibula isn’t a weight-bearing bone and it has long since healed.  And given that McFarland ran a 4.4 40 at the Combine, I would argue that his high ankle sprain is completely healed.  Neither should be a factor in his durability.

The immediate darling of the 2020 Steelers draft class, Dotson has the best injury report of all: it’s blank.  He was named a starter in his redshirt freshman year and never missed a game in 4 seasons.  And he looks pretty darn healthy here, bench pressing 475 pounds!

Oh boy.  Let’s just start by saying this dude is tough as nails.  As a high school senior, Brooks (like many HS athletes) played both offense and defense.  He was the starting QB for DuVal, as well as a safety and their punter.  He had just passed 1200 yards rushing (not bad for early October) and had a 66 yard TD pass in the game.  Scrambling on 4th down, he managed to get a pass off and then got hit and landed badly.  The result was a right ankle compound fracture as well as a right wrist fracture.  The game was stopped for 45 minutes and the crowd was silent.  It was described in reports as a gruesome injury, with his foot pointing in a direction it shouldn’t.  Think Alex Smith or Joe Theismann and you get the picture.  On the way to the hospital in an ambulance, he told his father he wasn’t playing football again.  By the time he arrived to the ER, he changed his stance to playing defense so that he could be the one hitting instead of getting hit.  After 5 hours of surgery and a week in the hospital, he was on the road to recovery.

A compound fracture is also known as an open fracture, meaning that the bone has broken the skin.  This is a surgical emergency due to the high risk of contamination and resulting infection.  You may recall that Alex Smith has had 17 surgeries in the course of his treatment, largely to deal with infection.  Brooks was extremely lucky and avoided any similar complications.

No specifics are available on his wrist fracture but based on the cast he is wearing in this photo (scroll to photo 2 of 4) which does not extend above the elbow, his arm did not require immobilization…suggesting that the fracture did not involve both bones of the forearm.

Bottom line: Brooks has had an incredible recovery and is now more than 4 years out from the injury.  The risk of infected hardware is slim to none this far out.  Traumatic arthritis is the most likely long term complication but it is unlikely to present a problem in the near future.

Another durable lineman.  Davis played 4 seasons at Nebraska, missing only one game his senior year for an ankle injury.  He was able to return the following week, so it was probably just a mild low ankle sprain.