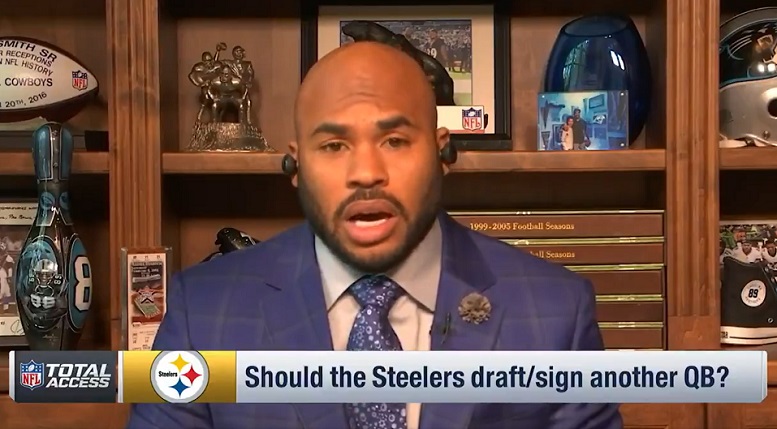 Can Pittsburgh Steelers quarterback Ben Roethlisberger return to form in 2020 after missing most of the 2019 season with a elbow injury that needed to be surgically repaired? Can the Steelers get back into the playoffs with Roethlisberger back? Will the Steelers still address the quarterback position in this year’s draft or free agency regardless? Former NFL wide receiver-turned NFL Network analyst Steve Smith Sr. attempted to answer several of the questions on Saturday.

First, Smith addressed the Steelers quarterback position from top to bottom in light of several other analysts and media members saying all offseason that the team needs to consider drafting one or signing a veteran to back up Roethlisberger.

“I’m not really sure if they should bring in another quarterback,” Smith said Saturday. “Obviously they don’t have a first-round [draft pick this year], so, that really eliminates the quarterback controversy. But when you really look at the Pittsburgh Steelers, they’re in the position to win now, to make that run in the playoffs with the new format, but also, too, Big Ben is ready. You see him, he’s working out. This time COVID-19 has affected a lot of people. However, it has also allowed us to kind of really just hone in our skills and really think about and plan what we want to do and start to prepare.

“And I think Big Ben is going to shock some people and come out when the season starts and kind of show that he missed football. And I really believe that they’re in a good situation. Can they draft a quarterback in the later rounds if they coveted someone? Absolutely, but they need to get Big Ben some help. When we look at the Los Angeles Rams and when they had some o-line issues, how it affected the ability for them to run a good, clean, high powered offense, it doesn’t work that well. So, they need to get some protection for Big Ben and whoever else steps in once Big Ben decides to retire.”

Moving past Smith’s unsolicited offensive line tangent, he was then asked on Saturday if he believes the Steelers that the Steelers are poised to be a playoff team in 2020 after first being reminded that the team came close to making the playoffs last season despite being without Roethlisberger most of the season and using a rotation of inexperienced quarterbacks throughout the year to replace him.

“If Big Ben is at the helm, absolutely they are,” Smith said. “Defensively they’ve started to get some things together. But offensively, you know, it all starts with Big Ben and then he’s got to make all those guys better. James Washington, improve. JuJu Smith-Schuster, he needs to now adjust to being that number-one wide receiver. So, it’s a Lot of different things. And then Eric Ebron was picked up, who’s an excellent tight end. So, I think they’re going to be in the mix if Big Ben is a captain of that Pittsburgh Steelers ship.”

For the most part, all that Smith had to say on Saturday about the Steelers appears to be on point and very objective. We’ll now wait and see if he sticks with that point of view the remainder of the offseason.