The Pittsburgh Steelers made Notre Dame wide receiver Chase Claypool their first selection in the 2020 NFL Draft Friday night and now his rookie season awaits him. While Claypool is likely going to find it hard to get considerable playing time on offense in 2020, he still has middle-of-the-road odds when it comes to his chances of winning the 2020 AP Offensive Rookie of the Year award.

According to BetOnline.ag, Claypool, who was drafted 49th overall on Saturday by the Steelers, began Monday at 40-1 odds to win the 2020 AP Offensive Rookie of the Year award. The 6042, 238-pound wide receiver, who caught 150 passes for 2,159 yards and 19 touchdowns in his four seasons at Notre Dame, will more than likely open the 2020 season no better than the team’s fourth wide receiver on the depth chart. He could, however, cut his NFL teeth early in his rookie season as part of a red zone package or two.

Claypool will also begin his rookie season helping out on special teams and especially on punt and kickoff coverage units, something he did quite a bit of during his college career at Notre Dame.

The Steelers had a rookie wide receiver last season that more than exceeded expectations. Steelers wide receiver Diontae Johnson, who was selected in the third-round of the 2019 NFL Draft out of Toledo, went on to catch 59 passes for 680 yards and five touchdowns in his rookie season. His 59 receptions led all rookies in 2019. Even so, Johnson wasn’t close to winning the 2019 AP Offensive Rookie of the Year award as that honor instead went to Arizona Cardinals quarterback Kyler Murray.

Murray, the first overall selection in the 2019 NFL Draft out of Oklahoma, completed 64.4 percent of his passes for 3,722 yards, 20 touchdowns, 12 interceptions and an 87.4 passer rating as a 2019 rookie. He added another 544 yards and four touchdowns on the ground as well.

The last Steelers player to win the annual AP Offensive Rookie of the Year award was quarterback Ben Roethlisberger in 2004. Prior to Roethlisberger winning the award for the Steelers, wide receiver Louis Lipps won the award in 1984 after registering 45 receptions for 860 yards and nine touchdowns during his rookie season. Lipps also returned 53 punts for 656 yards and a touchdown during his rookie season in addition to rushing three times for 71 yards and another touchdown.

Cincinnati Bengals quarterback Joe Burrow, the first overall selection in the 2020 NFL Draft, is currently the favorite to win the 2020 AP Offensive Rookie of the Year award at 5-2 odds. 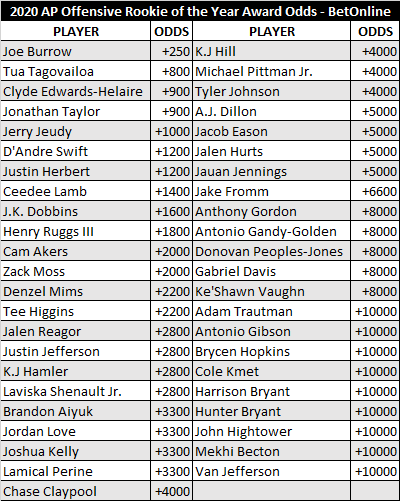