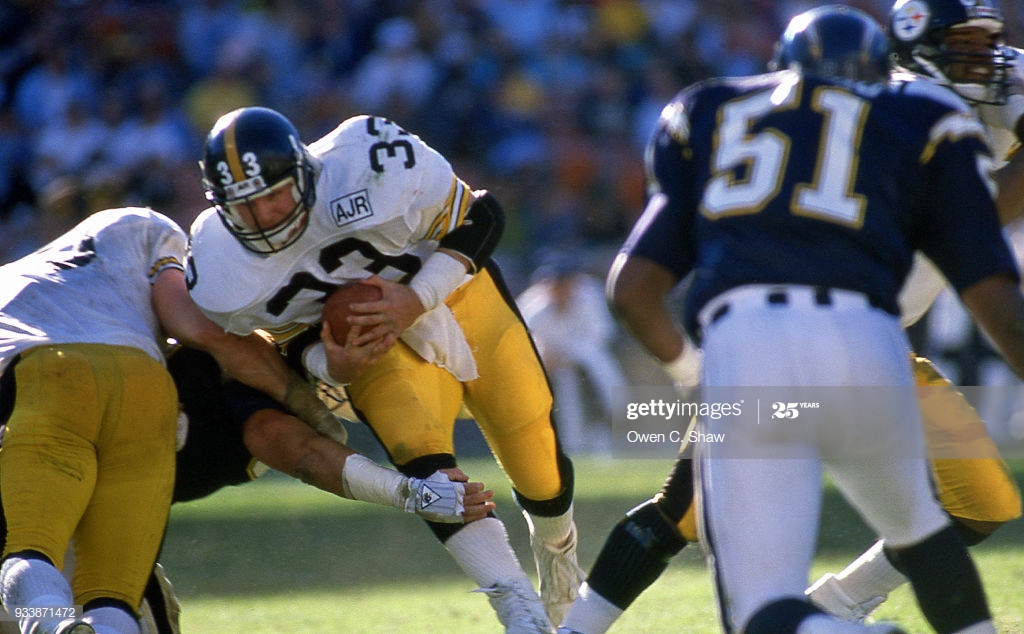 For those of us Pittsburgh Steelers fans who have passed the 50 years of excellence mark, we’ve admittedly never recovered from the greatest Super Bowl rush in football history.

Count ‘em. That’s four trophies. Hopefully, that will give you some perspective of us old-timers who have no patience for the Participation Trophies and gold stickers being liberally awarded for the team’s performance over the past ten years.

Can you imagine how awesome it was to see the Steelers raise the Lombardi Trophy so many times over such a short time span? To see them dominate a decade like no other team has? Not even Tom and Bill have won that many over the course of ten years.

Yet, as great as the high was, the low was burdened by unmet expectations.

This was the dark ages of the 1980’s which offered little in terms of musical excellence as Hollywood hacks were trying to replace Keith Moon and Jon Bonham types with cheap 9-volt battery sounding electronic drums.

As in your Pittsburgh Steelers. They were a shadow of themselves, and so it wasn’t a surprise when the great Chuck Noll got the “early retirement” treatment later granted by the Rooneys to coaches like Bruce Arians and Dick LeBeau.

Did someone say defense? Yes…we loved Coach Cowher because in Pittsburgh, we love defense. And, unlike the cool, unflappable Noll, on the sidelines Bill acted like any one of us fools in the cheap seats or in beer soaked bars.

We loved him for that as well.

But, even an ebullient personality like Coach began to wear out his welcome with the faithful when he proved to be more like Marty than Chuck.

His teams were good enough to dominate in the regular season, but when it came time to the games that mattered, flashy offensive teams hailing from San Francisco, Dallas, Denver and Green Bay made us look Less Than Zero.

Even with players like Rod Woodson, Greg Lloyd, Hines Ward and Jerome Bettis roaming the sidelines, there just wasn’t enough gas in the engine to get the Bus across the line.

And, this was all because Bill’s Achilles Heel was his lack of appreciation for the most important position on the field. We wanted Terry Bradshaw, he gave us Mike Tomczak.

For some reason, he was completely convinced a quarterback was only worth 25% of a fullback.

This was even with the obvious Exhibit A’s staring him in the face. His beautiful, hand crafted defense was getting manhandled by opposing players such as Troy Aikman, Joe Montana, Steve Young, John Elway and Brett Favre.

That was, until 2004 when the Steelers front office insisted he use one of his precious first rounders on a big armed gunslinger by the name of Ben Roethlisberger.

The team changed in that very moment as the Steelers were back on the board with a Super Bowl victory in 2005.

On January 27, of 2007, at the age of 34, Mike Tomlin took the reins of the Pittsburgh empire. He quickly showed to be a brilliant and gifted leader and rapidly delivered another Lombardi in 2009.

With defensive talent abounding, and a confident young coach of the highest character and standing, it looked like the Days of Dynasty had finally returned.

The Steelers suffered a heart breaking Super Bowl loss to the Green Bay Packers in 2011 and haven’t returned to the Big Game since.

After, a full decade of putting offense ahead of defense, last year Tomlin saw his defensive unit rising to the top of the charts once again.

Will this bright news and the return of a healthy, although aged, Ben Roethlisberger to the roster be enough for Pittsburgh to claim their next big prize?

The answer most likely lies in the success of the upcoming 2020 draft. It always does.

It’s the most important day in the legacy of the Pittsburgh Steelers. It’s where all of the greatest teams have been built.

So let’s look back at the foundations of franchise greatness. Here begins your journey through the past 50 years beginning with the draft of 1969. I cheated and included that year because I love L.C. Greenwood so much. And how could I ever leave out Mean Joe Greene?

To be clear, this list doesn’t include ANY undrafted free agents. That’s a whole different story. And, for players to be considered on these lists, they had to spend their prime years playing for the Black and Gold.

So get your Dr. Who on, we’re traveling back in time. It’s the greatest drafts picks of the past 50 years, beginning with the Ninth Round + (back in 1969, there were 17 rounds in the draft).

So, here we go Steelers…here we go!

L.C. Greenwood was selected nine rounds below Mean Joe Greene in the historic 1969 draft that began the seismic shift converting the Pittsburgh Steelers from perennial losers to arguably the greatest football dynasty of all time. Greenwood emerged as one of the central characters of the original Steel Curtain. A six-time Pro Bowler and two-time All Pro, many cite Greenwood as the most egregious oversight by the Hall of Fame selection committees, especially now that teammate Donnie Shell final got his jacket. Though being a Hall finalist six times his chances of one day getting enshrined may be fading. But for those who were blessed to see his trademark gold shoes chasing after hapless quarterbacks he will remain one of the most colorful personalities and talented players to don a Steelers jersey. And by being drafted in the tenth round, he is also one of the team’s best ever value picks.

When Steelers fans throw out Troy Polamalu’s name as the greatest safety in the history of the team it is with some apologies to the play of Mike Wagner. Even with names like Rod Woodson and Carnell Lake in the mix there has never been a Pittsburgh secondary the likes of the Steelers great defense of the seventies and Wagner was as big of a contributor as anyone else.

Although he didn’t make Superman plays by hurtling over tall linemen in a single bound like Polamalu he was excellent at…well…doing what safeties should do. He backed up his corners, squelched big plays and dished out punishing hits in the days when receivers weren’t wrapped up in bubble wrap. He was a two-time Pro Bowler (as well as many of his teammates of the time) and ended up with 36 career interceptions during an era in the NFL when passing was just a passing thought.

Jackson was one of those players who early in his career received little acclaim outside of Pittsburgh, and even by his coaches and the front office. Despite others being drafted to take his position, Jackson fought off all naysayers and established himself as the Steelers firmly entrenched left tackle. His perseverance paid off as he emerged as one of the top players at his position by the end of the decade and leveraged it into a big free agent’s contract with San Diego at the tail end of his career.

Truth be told, Merril Hoge doesn’t make this list alone through his on-field performance as his burst into Steelers Nation lore was cut short by concussion concerns. Yet, the fans’ favorite “factor back” gets some extra points for…well being such a Black and Gold homer on national television as an ESPN broadcaster…and somehow keeping his job! Well played Hogey. Semper Fi.

Besides having the greatest Steelers Scrabble name of all time Justin Strzelczyk was also one of the best utility players to wear a Pittsburgh uniform. Strzelczyk, who looked as if he stepped off a Harley Davidson was more Duck Dynasty than Hollywood and didn’t mind rolling in the mud by playing almost all positions on the offensive line. He never complained when he was shuffled more than a three card monte game and was loved by players, fans and coaches. Probably one of the best Sixth Man the Steelers have had, he was a steal at the eleventh round.

Mike Mayock (1981 -10th) Not much of a player at the pro level…but one heck of an analyst after his NFL career ended! The quality of his career as a general manager for the Oakland Raiders is still yet to be determined.

Frank Pollard (1980 – 11th) A true bowling ball of a player who was knocking them down long before The Bus came to town. Never spectacular, but a steady contributor during the Dark Ages for Steelers fans (the 1980’s).

Jerry Olsavsky (1989 – 10th) A true fan favorite and current Steelers coach, he was the team’s “Rudy” playing a major role in special teams and filling in admirably whenever the great starting linebackers of the 1990’s would need a spell. A devastating injury hurt his chances of becoming an established starter.