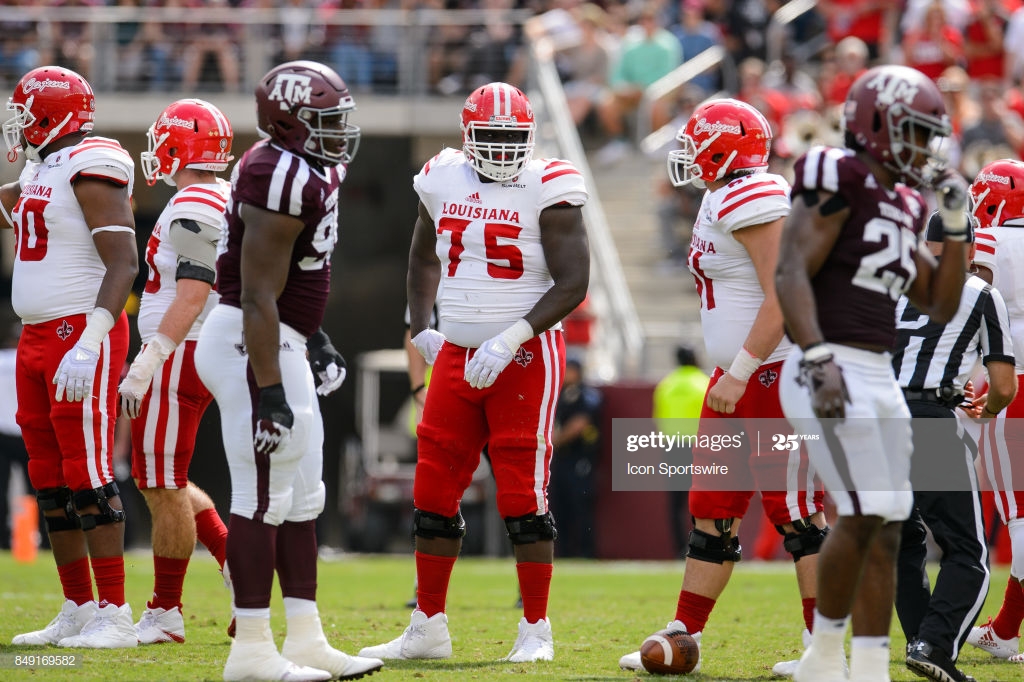 The Pittsburgh Steelers have selected Louisiana guard Kevin Dotson with the 29th pick of the fourth-round of the 2020 NFL Draft. It was the 135th pick overall in this year’s draft. It is the second of two scheduled fourth-round picks on Saturday.

Dotson measured in at the East West Shrine Game at 6040, 310-pounds with 33-inch arms. He was not invited to the scouting combine this year.

Dotson started 52 consecutive games for the Cajuns including all 14 during a 2019 season in which UL went 11-3 with a LendingTree win over Miami (Ohio). He was named a first team All-American selection by the Associated Press, USA Today, Sports Illustrated and Pro Football Focus.

2019 Season (Redshirt Senior) One of the highest-graded offensive linemen in the nation, Dotson started in all 14 of Louisiana’s games in 2019…Was named a First Team All-American by the Associated Press, USA Today, Sports Illustrated and Pro Football Focus…Named a Second Team All-American by Sporting News…Became the second player in school history to earn AP All-America honors after Orlando Thomas garnered Third Team honors in 1993 and Second Team honors in 1994…He was the first player in program history to be named a First Team All-American by the other publications…Was also named First Team All-Sun Belt and First Team All-Louisiana…Made his 52nd career start against Miami (Ohio) in the LendingTree Bowl, the second most by any offensive lineman in 2019…Helped pave the way for a Louisiana ground attack which finished the year ranked third nationally in yards per carry (6.28), fourth nationally in rushing touchdowns (42), sixth nationally in rushing yards per game (257.4) and seventh nationally in total rushing yards (3,604)…Part of an offensive line that ranked fifth nationally and first in the Sun Belt in sacks allowed (1.07)…Closed out his Louisiana career by participating in the East-West Shrine Bowl…Held preseason First Team honors from the Sun Belt, Phil Steele and Athlon Sports…Was also a named on the Outland Trophy preseason watch list.

2018 Season (Redshirt Junior) Played and started all of the teams 14 games…All-Sun Belt First Team selection…One of the leaders of the offensive line who blocked for three 700+ yard rushers.

2016 Season (Redshirt Freshman) Earned the starting job at right guard in the second week of the season and entrenched himself the remainder of the season…Played in all 13 games…Named to the Sun Belt Conference All-Newcomer Team.

2015 (Freshman) Redshirt season…Served as a member of the scout team.

High School Rated as the No. 4 guard in the state of Louisiana by Rivals.com…A three-time all-district selection…Helped lead the Green Devils to a 13-2 record and a berth in the Class 4A state semifinals…Coached by Paul Distefano…Named to the Class 4A All-State team…Named to the NOLA.com/The Times Picayune All-Baton Rouge Area Football Team…Played in the Louisiana High School Coaches Association All-Star Game.

Personal Born Sept. 18, 1996 in West Point, Miss….The son of Kelcy and Denise Dotson…Father played football at Louisiana from 1995-96…Mother ran track at McNeese…Has one brother, Kenny, and one sister, Payton…Uncles, Alvin and Dennis McKinley, played in the NFL for the Cleveland Browns and Arizona Cardinals, respectively…Majoring in mass communication.