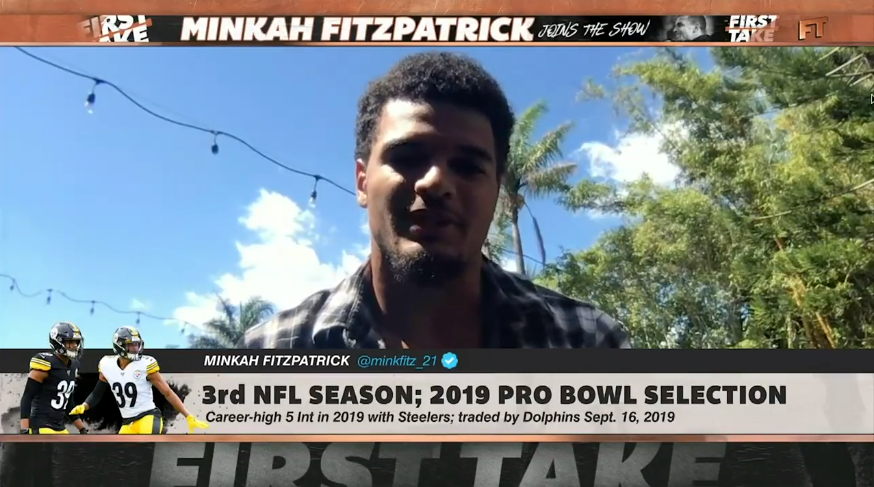 Pittsburgh Steelers safety Minkah Fitzpatrick certainly had a great 2019 season after being acquired via a trade with the Miami Dolphins as the former first round draft pick out of Alabama recorded five interceptions, one forced fumble, two fumble recoveries and scored two defensive touchdowns in the 14 games that he played in. That great play for the Steelers resulted in Fitzpatrick not only making the Pro Bowl for the first time, but being named a First-Team All-Pro as well. On Thursday, Fitzpatrick revealed what’s next for him coming off such a great first season in Pittsburgh during an interview on ‘First Take’ on ESPN.

Fitzpatrick also revealed his goals for the 2020 season on Thursday.

“Honestly, personal goals for this year. I think definitely trying to do the First-Team All-Pro and definitely Pro Bowl again,” Fitzpatrick said. “Definitely lead the DBs in at least three or four categories. And honestly, I’m gonna try and compete for that Defensive Player of the Year. Last year I had a pretty good run at it and then towards the end of the season the teams stopped throwing at me and whatnot, so it kind of affected my stats.”

Fitzpatrick is right. After recording all five of his interceptions and eight defensed passes in his first seven games with the Steelers, opposing offenses wised up and stopped throwing his way. That resulted in him having just one pass defensed in the Steelers final seven regular season games.

Fitzpatrick said after the 2019 season ended that he’s open to moving around more in the defense in 2020 to help prevent opposing quarterbacks from avoiding throwing his way.

“But I think next year we’re going to have different type of system, or just more people on the field that they can’t choose to not throw at me,” Fitzpatrick said Thursday. “So, I definitely will able to make more plays and consistently and not just in spurts. So, definitely going to keep competing for that Defensive Player of the Year as well as the Pro Bowl and All-Pro.”

New England Patriots cornerback Stephon Gilmore was named the 2019 AP Defensive Player of the Year after registering 53 total tackles, 20 passes defensed and six interceptions. Former Steelers safety Troy Polamalu was the last Pittsburgh player to win the Defensive of the Player of the year award in 2010.