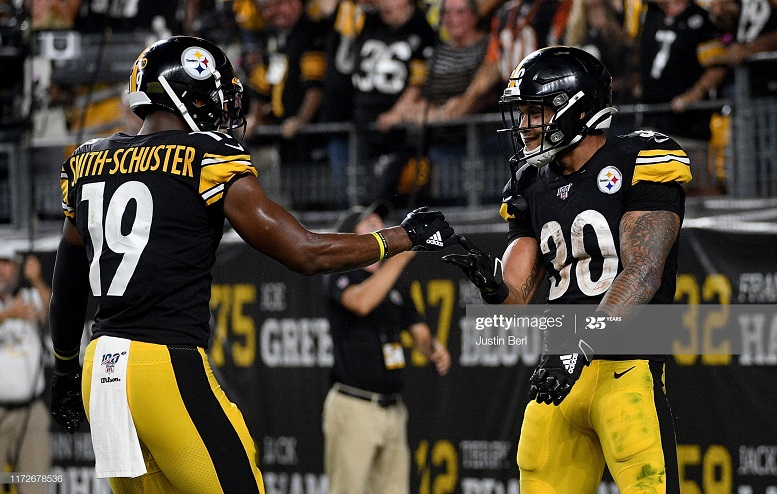 As for Conner, who rushed for 464 yards and 4 touchdowns last season on 116 total carries in the 10 games that he played in, BetOnline currently has him listed at 20-to-1 odds to be the NFL’s leading rusher in 2020. 16 other running backs have shorter odds than Conner currently does with Tennessee Titans running back Derrick Henry listed as the favorite on Eater weekend at 6-to-1 odds.

For Roethlisberger, who played all of six quarters last season before an elbow injury ended his 2019 campaign for good, he is ,listed at 40-to-1 to lead the NFL in passing yardage in 2020 with 17 other quarterbacks listed ahead of him with shorter odds. Not surprisingly, Saints quarterback Drew Brees is currently listed as the favorite at 5-to-1 odds to throw for the most yards in 2020.

In reality, placing bets on Smith-Schuster and Conner to end 2020 as the NFL leader in receiving yards and rushing yards, respectively, would be the equivalent of flushing money down the toilet. Even if both were to put up numbers similar to what each did in 2018, they would both more than likely still come up short. Former Steelers wide receiver Antonio Brown was the last Pittsburgh player to lead the NFL in receiving yardage in 2017 with 1533 yards. The Steelers, however, have never had a running back lead the NFL in rushing.

While Roethlisberger did lead the NFL in passing yardage in 2018, he’s not likely to repeat that feat in 2020.