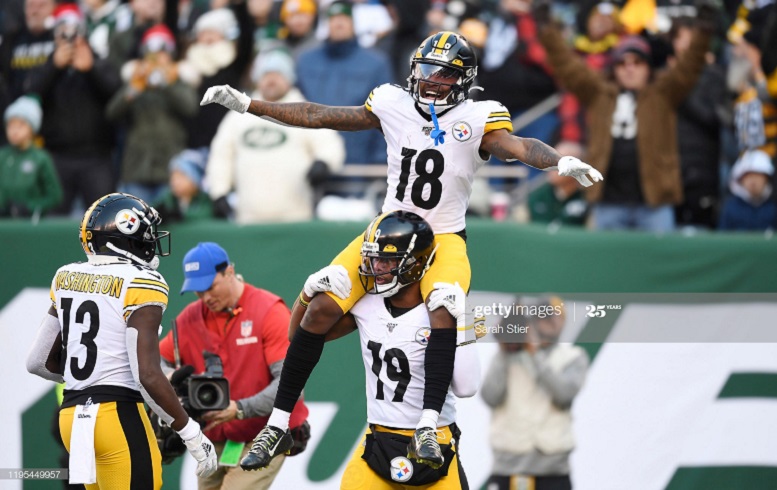 Last season obviously didn’t go as planned for Pittsburgh Steelers quarterback Ben Roethlisberger as an elbow injury suffered six quarters into it resulted in him needing surgery and being placed on the team’s Reserve/Injured list. While Roethlisberger was forced to watch most of the Steelers 2019 season from the sidelines, he was able to see and learn some things in the process and especially when it comes to the team’s top three wide receivers, JuJu Smith-Schuster, Diontae Johnson and James Washington.

Wednesday morning, Roethlisberger was a guest on DVE Radio, and during his interview he disclosed what all he learned about each of his top three wide receivers last season while sidelined with his elbow injury and how he’s looking forward to getting back on the field with all of them in 2020.

“Well, I’m excited obviously to get back out there,” Roethlisberger said. “I think the guys are. I talked to quite a few of them and check in with them from time to time. And, you know, I think that we got to see some growth [last season] from guys. I thought Diontae [Johnson] really showed kind of what he’s capable of doing. I thought James Washington really took some big steps in terms of his conditioning. You know, you kind of are able to see some of the small things when you’re on the sideline that you wouldn’t normally see when you’re in the huddle on the field.

“I saw James Washington on numerous occasions, multiple times a game, run deep routes, obviously full speed looking for the ball – doesn’t get it and he is like sprinting back to the huddle and then runs another route. And he spent last offseason really putting his conditioning above I think pretty much everything else. And I think it showed last year and I think he’s going to continue to do that. He’s going to continue to grow and get better.”

Johnson’s growth during his rookie season was fantastic as last year’s first of two Steelers third-round draft picks not only led the team in receptions in 2019 with 59, but all NFL rookies as well. As for Washington, he made a huge jump in his second season as the former second-round draft pick out of Oklahoma State managed to catch 44 passes for 735 yards and three touchdowns after catching just 16 passes for 217 yards and a touchdown as a rookie in 2018.

While the team’s expected leading wide receiver last year, JuJu Smith-Schuster, only managed to catch 42 passes for 552 yards and three touchdowns in his heavily injury-shortened 2019 season, Roethlisberger also made it clear on Wednesday that he learned some new things about the former second-round draft pick out of USC.

“And I think one of the most impressive things which I saw on the sideline and had communication with him, was JuJu,” Roethlisberger said Wednesday morning. “I think you saw a guy that wasn’t as productive as he wanted to be and as he was expected to be, but he was still able to go out there and be a leader for guys – guys in that receiver room. Guys are still looking up to him, still talking to him. He was out there giving it everything he had. So, it’s not easy for guys to do, but he took a selfless mentality and attitude into last season and I think it showed for guys like me that could really see it.”

With the 2020 offseason practices likely to be canceled due to the coronavirus pandemic, Roethlisberger probably won’t get to work any with the Steeler full offense until training camp hopefully gets underway on time in the summer. Even if that’s the case, I suspect Roethlisberger will get together a few times with his top three wide receivers in a makeshift practice setting once he’s given the green light to do so as part of his rehab process.

In the meantime, however, Roethlisberger remains on his mapped-out rehab course and said Wednesday that the coronavirus pandemic hasn’t altered it much of any. He’s even throwing some to Steelers wide receiver Ryan Switzer on a regular basis.

In case you’re curious, Smith-Schuster, Johnson and Washington were all on the field together at the same time last season for 278 offensive plays. Only 16 of those plays included Roethlisberger at quarterback.