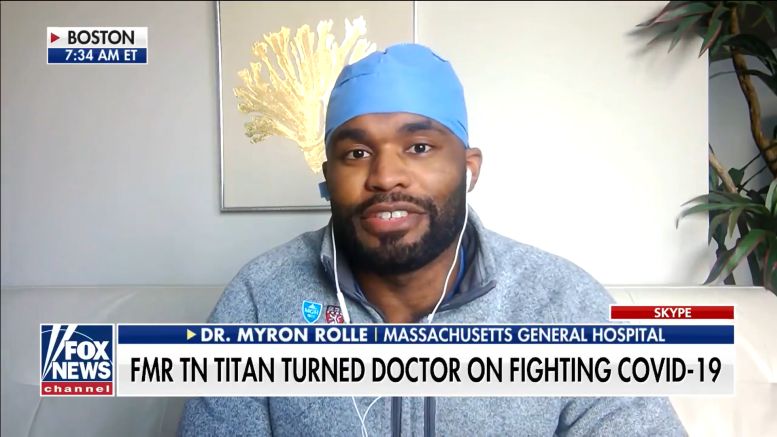 Myron Rolle’s time and impact with the Pittsburgh Steelers was brief, accounting for just an offseason in 2012. A former sixth-round safety selected by the Tennessee Titans in 2010, where he played for two seasons, the Florida State product is leaving a much larger impact on the world right now.

You might recall that Rolle was a Rhodes Scholar prior to being drafted. After his career in the NFL came and went, he did what he always knew he would do, which is to pursue neurosurgery. Three years ago, I wrote about his having been accepted into a neurosurgical residency program. Today, he finds himself a resident at Mass General, on the forefront of the fight against the COVID-19 pandemic.

“The influx of patients that we saw with either symptoms or positive tests, it was staggering, and I noticed our hospital started to adjust and change policies based on this number to mitigate and handle and manage these patients. In effect, even our neurosurgical department, in a way, our neurosurgical floor has been transformed into a COVID-19 patient-only floor”, he said in an interview with FOX News recently, about the changes he noticed in recent weeks.

“We have patients who have degenerative spine disease, they have disc herniation”, he went on. They’ve had scheduled surgeries around this month, but we’ve had to tell them that their clinical appointments would have to be cancelled, and they would have to postpone their surgery…If we have to be activated, as neurosurgery doctors, to either take care of these COVID patients or transform our ORs into ICUs, then we have to do it, and that’s the call”.

Hospitals in hotspots, and soon all around the country, are full beyond capacity as field hospitals are opening up in the middle of convention centers, parks, and even ships. What we are experiencing is unprecedented in our time, and we are not yet at the worst of it.

“It’s bad right now, it’s difficult right now. For a great hospital like Mass General, that’s taxed and strained with resources, but we’re dealing with it”, Rolle said. “I would say to the public, adhere to what the healthcare professionals and the politicians are saying right now, which is, have lifestyle behavior modifications. Stay at home. Physical distance right now. Do your part, play an active role”.

“There’s a buy-in that needs to happen, a collective buy-in from everyone to sort of flatten this curve”, he continued. “Slow it down, give the epidemiologists and nurses, doctors, physicians, pharmacists, all these people, time to mitigate, find therapies, find vaccinations, find ways for us to get over this, because we will. I’m optimistic that we can”.

Unfortunately, try as you might, sometimes the real world intrudes upon our sports sanctuary that keeps the troubles of our day-to-day life at bay. The world is currently robbed of the solace of sports, in the most striking example of this imaginable. The fact that a former Steeler is in the middle of all this is yet another reminder of that reality.

Now, Rolle is a neurosurgery resident who is seeing the impact COVID-19 is having on the healthcare industry. pic.twitter.com/hGj9B8mJva